A portfolio of 20 strata-titled office units in Parkway Centre is being put up for sale via an expression of interest exercise, at a total indicative price of up to $34.6 million.

Parkway Centre, in Marine Parade, is a 13-storey suburban commercial building with retail units on the first floor and office units from the second to 13th floors.
The 20 office units on sale have a total strata area of 21,646 sq ft, with about 65 years left on the lease.
Unit sizes range from 732 sq ft to 1,356 sq ft, including six contiguous units with a combined strata area of 5,748 sq ft.
Currently, this portfolio enjoys an occupancy rate of about 78 per cent, with a tenancy mix that includes enrichment and tuition centres, and a music school, among others. 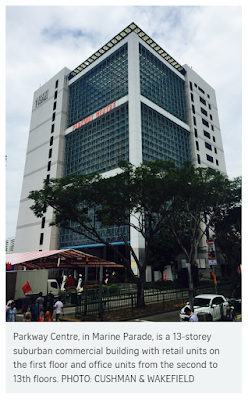