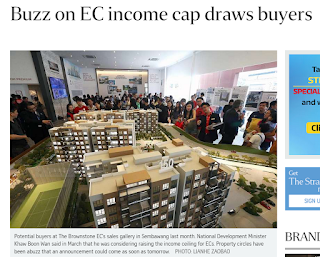 Some who are above eligibility income ceiling are said to have reserved units, expecting a change

Some buyers of executive condominiums (ECs) have placed applications with developers in anticipation that the income ceiling may be raised soon.
This is the case at the 14 or so EC projects on the market. They include The Brownstone and The Vales.
The limit is currently $12,000 for ECs and $10,000 for new HDB flats.
Some buyers who are above the eligibility income ceiling for ECs are understood to have reserved units after National Development Minister Khaw Boon Wan said in March he was considering raising the level.
Property circles have been abuzz that an announcement could come as soon as tomorrow when Prime Minister Lee Hsien Loong delivers his National Day Rally speech, an occasion in which headline announcements of this sort are often made.
Experts expect an increase of about $2,000 to the ceiling for both housing segments.
In the past, an EC applicant just several hundred dollars above the income limit could appeal to HDB but those with household incomes of $13,000 or $14,000 would likely be rejected. A Housing Board spokesman said cases it has generally considered "involve applicants whose income exceeds the ceiling only marginally, or who have extenuating circumstances like having to support aged parents or siblings with special medical conditions".
In the months since Mr Khaw's remarks, more applicants in the $13,000 to $14,000 income bracket have been visiting EC showflats, The Straits Times understands.
Many of their applications are parked with developers or agents, who are waiting for a rule change before submitting their forms to HDB.
The moves come amid a soft market with about 2,232 launched and unsold ECs and another 3,007 units not launched as at end June. This means there is little opportunity cost for developers to reserve a unit.
Some of these wealthier buyers are expected to show up at today's launch of Sol Acres EC in Choa Chu Kang. The project by MCL Land has received about 800 e-applications.
MCL Land chief executive Koh Teck Chuan said any rise in the income ceiling would be positive for ECs, but whether this would spill over to the private market is yet to be seen. "Private market buyers are still constrained by the Total Debt Servicing Ratio," he noted.
As more people can choose to buy an EC, private home sales may be affected, said Mr Elson Poo, general manager of marketing and sales at Frasers Centrepoint Homes. "But buyers in such a high-income bracket - $12,000 to $14,000 with the potential to earn more - can usually afford a private home and may not like the location of an EC, even if they are eligible to buy one."
Mr Li Jun, general manager of Qingjian Realty (South Pacific) Group, was less sanguine. "Assuming the increase in income ceiling for both HDB flats and ECs is similar, EC developers might face a situation where the number of potential buyers is fewer... For example, the number of households with income between $10,000 and $12,000 is 50,000. Whereas, after the income ceiling is increased, the number of households with income between $12,000 and $14,000 is reduced to only 40,000."
But a rise in the income ceiling for both segments "would be relevant to stay in tandem with the rising salary and income of Singaporeans", he added.
PropNex Realty key executive officer Lim Yong Hock said EC prices could increase and a recent uptick in sales - from 110 in June to 495 last month - is partly a result of buyers worried that this, in fact, will occur.
It is also possible that the raising of the income ceiling for new HDB flat purchases may have the opposite effect of driving demand to public housing, particularly, for buyers who are looking at no-frills housing.
Market watchers say these are typically couples with a combined monthly income higher than $10,000, who do not want to commit too much financial resources to housing. They would rather buy an HDB flat than a condo or EC unit.
The Straits Times / The Business News                               Published on Saturday, 22 August 2015  By Rennie Whang                                                           Buzz on EC income cap draws buyers


Condos Properties
Development charge rates for residential site to stay the same
Mortgagee sales of larger home on the rise
$15.8m loss in St Regis penthouse sale 'small change' for Japanese billionaire
New private home sales surge in July, thanks to Fernvale project
Jump in number of M'sian and Chinese buyers of S'pore properties in Q2: DTZ
It's a shore thing for these owners of seaside homes
Private property market 'stabilising'
Quality of life has a price, says Moshe Safdie
Bumper crop of shoebox units to come in 2017
Private apartments prices continue slide
Demand up for high-end homes except for those on Sentosa