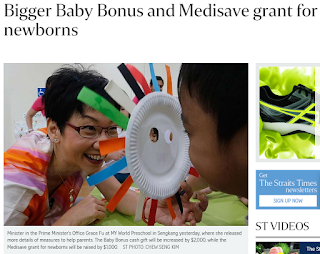 Measures aimed at making it easier for couples to look after their children and support them, says Grace Fu.

The Baby Bonus cash gift for children of married couples will be increased by $2,000, bringing the amount they will receive to at least $8,000.

It will be given to parents in two stages: the first when the child is 15 months old, and the rest at 18 months.
The Medisave grant for a newborn will be raised as well, by $1,000 to a total of $4,000, which will help pay for the child's MediShield Life premiums and other medical expenses. The full grant will be given to all Singaporean babies, regardless of whether their parents are married.

EASING PARENTS' BURDEN
As a first-time dad, I'm always thinking about Gwyneth, so if possible, I want to spend more time with her.
MR YONG YONG KANG, 26, assistant marketing manager, whose daughter Gwyneth was born in April.

These extras for Singaporean babies born on or after Jan 1 this year will be given out from next January.
These details were released by Minister in the Prime Minister's Office Grace Fu yesterday, after Prime Minister Lee Hsien Loong announced the measures on Sunday.
"The package is really to make it easier for couples to look after their children, support them on their journey," said Ms Fu, who oversees population issues.
Previously, the first two children of a married couple got $6,000 in cash each under the Baby Bonus scheme, while the third and fourth child received $8,000 each.
There was nothing in cash for the fifth and subsequent children.
So, depending on the birth order, married couples will get $8,000 or $10,000 per child in cash from the Baby Bonus scheme.
While the extra sum is handed out on the 15th and 18th month after the child's birth, the original cash bonus will still be given in the first, sixth and 12th month after the child is born.
"Many couples have said that expenses for their children are higher between the ages of zero and 18 months," said Ms Fu, explaining why the Government is spreading out the cash disbursement.
As for extending the cash bonus to unwed parents, she said it was "something we're always discussing with parents, the public and the Ministry of Social and Family Development, and we will always review this".
"But we also have to take cognisance that the values of family, of intact family, are very strong in the community. It's still a very important value for us to cherish and endorse, so this is where a distinction is probably still necessary," she added.


Foundation laid for next generation neighbourhood centre in Punggol