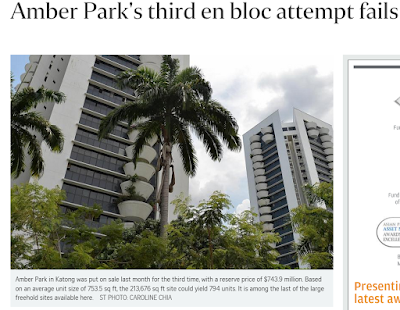 It was third time unlucky for the Amber Park condominium, after yet another collective sale tender closed with no bids.
All is not lost, however, as several local listed developers have submitted expressions of interest to the collective sale committee.
The 29-year-old Katong estate condo was put on sale last month - its third attempt - with a reserve price of $743.9 million. That works out to a land cost of $1,225 per sq ft per plot ratio as the 213,676 sq ft site has a plot ratio of about 2.8.
It is among the last of the large freehold sites available here, according to the sale committee.
Based on an average unit size of 753.5 sq ft, it could yield 794 units, far exceeding the current 200.

POOR MARKET SENTIMENT
The take-up at new launches has been weak... At current prices, owners will not be motivated to sell.
MS SUZIE MOK, senior director of investment sales at Savills Singapore, on how poor market sentiment has affected en bloc sales

Other sites on the market are garnering some interest, including a smaller section in nearby Amber Road, said its marketing agent, Ms Yong Choon Fah, JLL's national director of capital markets.
The 22,800 sq ft freehold site could accommodate up to 80 apartments. Offers of around $60 million are expected for the tender, which closes on July 28.
Several bids were lodged for Fairhaven, a 15-unit condo in Sophia Road. The tender closed on July 1, and negotiations are ongoing, said Ms Yong, who is marketing this property as well.

The District 9 freehold plot has a land area of about 16,660 sq ft and a gross plot ratio of 2.1.
The collective sales sector has been muted overall, despite these flashes of success.
How the en bloc market fares is a function of how the property market fares, said Mr Karamjit Singh, JLL's international director and head of residential markets. He noted: "Activity picks up only when it's generally on the uptrend, which is not the case at the moment."
Ms Suzie Mok, a senior director of investment sales at Savills Singapore, said current market sentiment does not favour en bloc sales. "The take-up at new launches has been weak... At current prices, owners will not be motivated to sell."
Earlier this year, the freehold Wilshire condo in Farrer Road failed in its en bloc attempt, which tagged the reserve price at $95 million.
Newton Imperial, Spring Grove, Riviera Point, Kheam Hock Gardens, Derby Court and Fragrance Court all tried collective sales last year, but without any success. Over at Tanglin Shopping Centre, the strata owners have been trying for the past three years to sell off their units collectively.
The Straits Times / Business                      Published on Friday, 17 July 2015                          By Rennie Whang                                 Amber Park's third en-bloc attempt fails
Please click the following for other Related Readings: