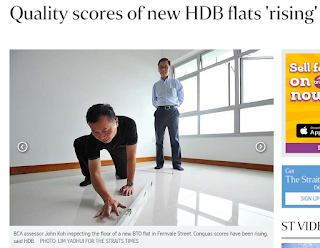 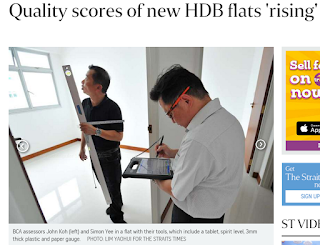 Flats’ quality: Passing standards also up
Before the buyers of a new public housing apartment even step into their new homes, strangers would have trudged through the flats and their rooms.
These men and women, assessors from the Building and Construction Authority (BCA), are there to conduct inspections on different corners of the flat, checking the quality of the home, its workmanship and whether it is safe to live in.
Their checks will go towards a score under the Construction Quality Assessment System (Conquas), which reflects the overall workmanship quality. The higher the Conquas score, which is upon 100, the better the workmanship. The Conquas score also takes into account structural works - how safe the building is - and mechanical and electrical works.
And while the attention in recent months has been on defects found within several of the new Build-To-Order (BTO) flats in Punggol and elsewhere, the Housing Board said that Conquas scores have been steadily rising.
The average Conquas score for HDB flats has improved from 65.7 when the scheme was first introduced in 1989, to 88.6 last year. Since 2008, the Conquas scores for public housing projects have been above 81.
A spokesman for the Ministry of National Development (MND) told The Straits Times that the higher scores are the result of "a robust framework of quality assurance and checks that the HDB has put in place".
Recently, several housing projects made the news.
Residents in Waterway Terraces I, a BTO project, complained about rainwater seeping into their flats last month.

CONSIDER PENALTY TOO
I feel there should be a penalty on top of this for errant developers, so hopefully they will be more careful in their work.''
PROJECT MANAGER ANDY TAN, a resident at Trivelis, which has a Conquas score of 87.1. The Design, Build and Sell project was in the news recently when residents complained about defects or design flaws in their flats.

Residents in Design, Build and Sell Scheme projects such as Centrale 8 and Trivelis also complained of defects or design flaws like wall cracks and uneven or stained tiles on floors.
Project manager Andy Tan, 33, a resident at Trivelis, which has a Conquas score of 87.1, said: "This is very surprising, because my flat definitely had defects like scratches on the floor tiles before I moved in.
"I'm not sure how thorough the checks are.
"I feel there should be a penalty on top of this for errant developers, so hopefully they will be more careful in their work."
The MND spokesman noted that there will be some "imperfections" due to "high dependency on workmanship of individual workers".
There are also latent defects, and defects such as hairline cracks may surface only later due to "movement" such as vibrations from renovation works.
"For these reasons, a one-year Defect Liability Period is provided for all projects, to allow for rectification if necessary," she said.
Common feedback includes uneven joints or gaps in between tiles, hairline wall cracks and colour inconsistency of timber flooring.
"These do not affect the structural integrity of the building, and can be rectified easily and quickly. (They) do not compromise the functionality or liveability of these homes," she added.
"The high Conquas score is an affirmation that the quality of HDB flats has not been compromised despite the ramp-up of our building programme in the last few years."
All public sector building projects with a contract sum above $5 million will undergo such checks. About one in four public homes gets checked directly.
She added that the HDB has a list of recommended building materials and equipment suppliers and contractors have to adhere to it. There are also audits and checks to ensure the work completed is consistent with the approved plans.
Conquas passing standards have also been raised over the years, including stricter assessment criteria, she noted.
There is no "rescoring", which means the Conquas score is final. There is a list on BCA's website.
"This motivates the builder to adopt good workmanship quality in all areas prior to assessment," said the spokesman.
Teacher Y.P. Chew, 28, who bought a BTO flat in the Kallang area, noted: "It's good to know that on average, workmanship is of better quality, but that said, it's of no comfort if my flat contains defects. I would be worried (about) getting the defects resolved in good time."
The Straits Times /S'pore                                                   Published on Tuesday, 11 August 2015       By Lim Yi Han                                                                     Quality scores of new HDB flats 'rising'