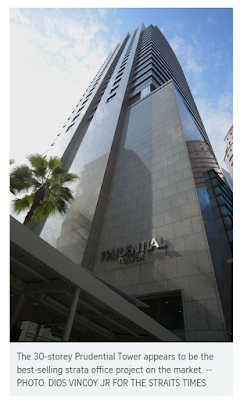 Some well-heeled foreign buyers have been spending big in the strata office market amid selective buying in the segment.
A Chinese buyer has splashed out about $100.6 million on the 25th to 27th floors of Prudential Tower, according to caveats lodged.
This works out to an average of $2,750 per sq ft (psf), based on unit areas of 12,196 sq ft per floor.
The Shanghai native is believed to own food and beverage chains and is a property developer as well. Prudential Tower marks his first strata office investment here, although he already owns several shophouses and residences.
A European buyer has picked up the 28th and 29th floors, paying about $73.2 million, or $3,000 psf. Last year, he bought Samsung Hub's 19th floor for about $41.7 million.