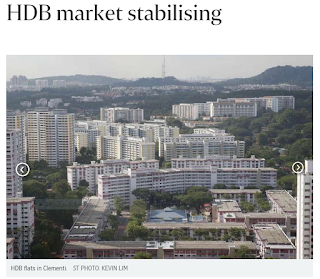 The Housing Board resale market has been in the doldrums for some years now, but the latest official data may give home owners some cheer.

Prices continued to fall, as they have for several months in a row, but the decline was a mere 0.4 per cent in the three months to June, HDB data showed.
This was far better than the average decline of 1.4 per cent seen over the previous four quarters.
What was even more promising was that flat transactions shot up by nearly 28 per cent in the last quarter. The market is typically slower in the first three months of the year but, even then, the sharp nature of the jump cannot be simply explained away by seasonal factors, said property analysts.
They have previously said what HDB data is now confirming: The public housing market, long dogged by weakening prices due to government cooling measures, is showing clear signs of stabilisation.

Some believe that a market recovery may come as early as next year. They cite the Government's plans to reduce the supply of Build-To-Order flats and falling resale prices as factors that would spur demand for resale units and prop up their prices.
But with cooling measures such as a lower mortgage servicing ratio cap still in place, experts believe prices will remain flat at least till the end of the year.
More home completions in the coming year will also keep resale prices down, said PropNex Realty's chief executive Mohamed Ismail Gafoor.
So, when will the recovery actually happen?
Even experts cannot put a finger on it.
Some, like Mr Nicholas Mak, research head at SLP International Property Consultants, believe a recovery will be "policy-led" and dependent on whether the Government eases the cooling measures. It could also be delayed if the income ceiling for new HDB flats is raised, drawing demand away from the resale pool.
As the market is on the cusp of change, those looking to sell their flat or buy a resale flat need to decide whether they can wait.
The Straits Times / S'pore                         Published on Tuesday, 28 July 2015                                By Yeo Sam Jo                    Public housing market showing clean signs of stabilisation