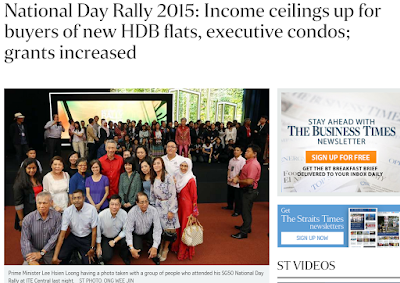 Low-income households to benefit as well, with two-room flats 'even more affordable'

More Singaporean households will be eligible to buy new Housing Board (HDB) flats and executive condominiums (ECs) as income ceilings for both are being raised, Prime Minister Lee Hsien Loong announced in his National Day Rally speech last night.
An existing housing grant for middle- and lower-income households will also be made available to more homebuyers, and the grant amount will be increased.
"HDB flats will always be affordable and accessible to all," said Mr Lee, as he announced changes to help home buyers across the income spectrum.

For middle-income households buying a new flat for the first time, more will now qualify for the Special CPF Housing Grant. This grant is currently available to households earning up to $6,500, covering half of all households. It will now be extended to those earning up to $8,500, such that two-thirds of households qualify.

The household income ceiling is currently $10,000 for new HDB flats and $12,000 for ECs.
These are being raised to $12,000 for HDB flats and $14,000 for ECs. The last time ceilings were raised was four years ago.But incomes have since risen, noted Mr Lee.
The backlog of first-time buyers has also been cleared, after 100,000 HDB flats - the equivalent of four Clementi towns - were launched in the past five years.
"Most first-timers can now choose a flat in a non-mature estate on their first try," noted Mr Lee.
The Government is, therefore, raising the income ceilings for both HDB flats and ECs.
One of those who will benefit is bank compliance officer Sheila Yeo, 26, who hopes to get a flat with her boyfriend, a 27-year-old customer service manager. Their combined incomes are just $100 over the current $10,000 ceiling.
"I'm happy that they've raised the ceiling as I don't have to go through the appeals process. It's very troublesome," said Ms Yeo, who tried unsuccessfully to get a Clementi flat in May.
But she worries that applying for a flat will be more competitive now.
Mr Ku Swee Yong, chief executive officer of real estate firm Century21, also notes that possibility, saying: "This will increase the pool of applicants and competition may be tougher."
For middle-income households buying a new flat for the first time, more will now qualify for the Special CPF Housing Grant (SHG).
This grant is currently available to households earning up to $6,500, covering half of all households.
It will now be extended to those earning up to $8,500, such that two-thirds of households qualify.
R'ST Research director Ong Kah Seng said the change is a good move that is likely to benefit many young working adults.
He does not expect it to increase competition too much, as the newly eligible buyers are likely to have aimed for a BTO flat to begin with.
Low- and middle-income households covered by the SHG will also get more, as the maximum grant goes up from $20,000 to $40,000.
But this varies with income, with lower-income families receiving bigger grants. For instance, a median-income household that would previously receive $10,000 in SHG will now receive $30,000.
For low-income households, two-room flats will become "even more affordable" with the doubled SHG, said Mr Lee.
"Now with these latest changes, even if you earn below $1,000, but you hold a stable job and you contribute to CPF regularly, you can still afford a two-room flat."
The Straits Times / Top of The News                  Published on Monday, 24 August 2015               By Janice Heng and Yeo Sam Jo                                                                                                      National Day Rally 2015: Income ceilings up for buyers of New HDB flats, ECs; grants increased