Prices of completed private apartments fell about 1.9 per cent over the last six months, according to data released yesterday.
The decline follows a decrease of 1.3 per cent in the second half of last year, and a 3.7 per cent price fall in the first six months of last year.
They are expected to keep falling, leaving values down 3 per cent to 4 per cent for the full year, experts said. Units in the central region posted the biggest price decline in the first half of this year, falling 2.5 per cent, according to flash estimates for the NUS Singapore Residential Price Index (SRPI).
This was because pricier properties in prime central locations took a bigger hit from cooling measures, said Mr Ong Teck Hui, JLL national research director.
Prices of non-central units fell about 1.3 per cent, while small units across Singapore slipped about 2.4 per cent.

SUPPLY GLUT
In this year and the next, the residential leasing market in suburban areas and in the small apartments sub-market will face growing supply and stagnant demand.
MR NICHOLAS MAK, SLP International executive director

The falls in the SRPI over the past two years - the Total Debt Servicing Ratio was implemented in June 2013, causing prices to drop in its wake - mirror those in the Urban Redevelopment Authority's Property Price Index (PPI), noted Mr Ong.
The SRPI has declined about 10 per cent from its peak reading in the third quarter of 2013, while the PPI has declined by 6.7 per cent.
"Sellers of resale properties, being individuals, can be more flexible in pricing. On the other hand, developers in the primary market tend to be more sticky with their prices, thus explaining the bigger fall in resale prices compared with new sales," said Mr Ong.
Overall prices of completed private apartments fell 0.3 per cent from May to June, although the sub-index for properties in the central region was up 0.3 per cent in this period.
Mr Nicholas Mak, executive director of SLP International, said: "This could be caused by bargain hunters buying some of the prime properties, as prices have weakened in this segment for the past two years." 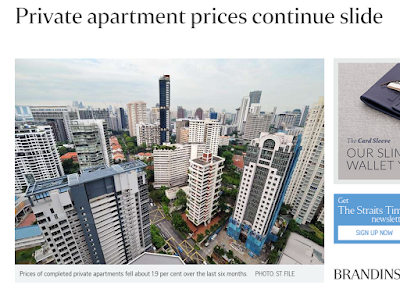