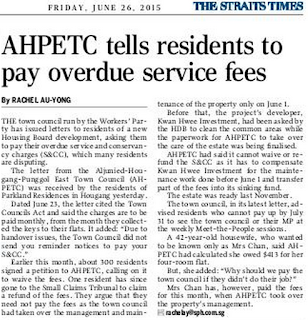 THE town council run by the Workers' Party has issued letters to residents of a new Housing Board development, asking them to pay their overdue service and conservancy charges (S&CC), which many residents are disputing.
The letter from the Aljunied-Hougang-Punggol East Town Council (AHPETC) was received by the residents of Parkland Residences in Hougang yesterday.
Dated June 23, the letter cited the Town Councils Act and said the charges are to be paid monthly, from the month they collected the keys to their flats. It added: "Due to handover issues, the Town Council did not send you reminder notices to pay your S&CC."
Earlier this month, about 300 residents signed a petition to AHPETC, calling on it to waive the fees. One resident has since gone to the Small Claims Tribunal to claim a refund of the fees. They argue that they need not pay the fees as the town council had taken over the management and maintenance of the property only on June 1.
Before that, the project's developer, Kwan Hwee Investment, had been asked by the HDB to clean the common areas while the paperwork for AHPETC to take over the care of the estate was being finalised.
AHPETC had said it cannot waive or refund the S&CC as it has to compensate Kwan Hwee Investment for the maintenance work done before June 1 and transfer part of the fees into its sinking fund.
The estate was ready last November.
The town council, in its latest letter, advised residents who cannot pay up by July 31 to see the town council or their MP at the weekly Meet-the-People sessions.
A 42-year-old housewife, who wanted to be known only as Mrs Chan, said AHPETC had calculated she owed $413 for her four-room flat.
But, she added: "Why should we pay the town council if they didn't do their job?"
Mrs Chan has, however, paid the fees for this month, when AHPETC took over the property's management.
The Straits Times / Singapore                             Published on Friday, 26 June 2015