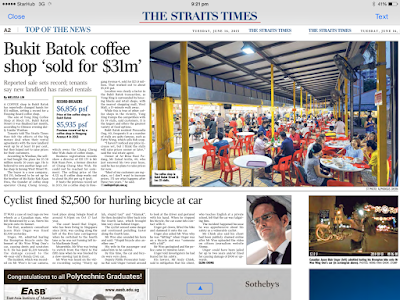 A COFFEE shop in Bukit Batok has reportedly changed hands for $31 million, setting a record for a Housing Board coffee shop.

The sale of Yong Xing Coffee Shop at Block 155, Bukit Batok Street 11 was finalised last month, according to Chinese evening daily Lianhe Wanbao.
Tenants told The Straits Times they felt the effects of the big money deal when their rental agreements with the new landlord went up by at least 10 per cent, but they hoped not to raise prices for their customers.
According to Wanbao, the seller had bought the place for $3.38 million nearly 20 years ago. He is believed to own another large coffee shop in Jurong West Street 91.
The buyer is a new company, EH 155, believed to be set up by the brother of Mr Ricky Kok Kuan Hwa, the founder of coffee shop operator Chang Cheng Group, which owns the Chang Cheng Mee Wah chain of coffee shops.
Business registration records show a director of EH 155 is Mr Kok Kuan Pow, a former director of Chang Cheng Mee Wah. He could not be reached for comment. The selling price of the 4,521 sq ft coffee shop works out to about $6,856 per sq ft (psf).

The coffee shop in Bukit Batok Street 11 has 19 stalls. -- ST PHOTO: ALPHONSUS CHERN
It beats the previous record set in 2013, for a coffee shop in Hougang Avenue 4, sold for $23.8 million. That worked out to about $5,935 psf.
Location was clearly a factor in the Bukit Batok transaction, as Yong Xing is surrounded by housing blocks and retail shops, with the nearest shopping mall, West Mall, a 15-minute walk away.
While this is true of other coffee shops in the vicinity, Yong Xing trumps the competition with its 19 stalls, said customers. It is the largest and offers the greatest variety of food options.
Bukit Batok resident Prescealla Ong, 40, frequents it as a number of stalls are quite famous, such as Fatty Weng, which sells fish soup.
"I haven't noticed any price increase yet, but I think the stalls will raise prices sooner or later," said the real estate agent.
Owner of Ar-Rina Nasi Padang, Mr Zainal Arrfin, 49, who just renewed his two-year lease, said he has no plans to raise prices for now.
"Most of my customers are regulars, so I don't want to increase prices. I'll see what happens after these two years," he said.
The Straits Times/ Top of The Newss                                      Published on Tuesday,16 June 2015