HDB resale prices may be bottoming out: Analysts. Prices, volumes inching up, but others less optimistic about an early recovery 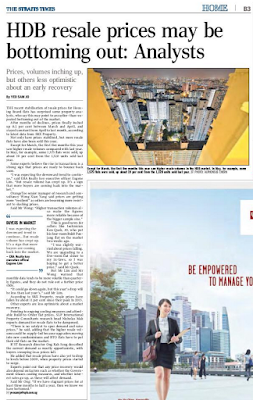 THE recent stabilisation of resale prices for Housing Board flats has surprised some property analysts, who say this may point to an earlier-than-expected bottoming out of the market.

After months of declines, prices finally inched up 0.2 per cent between March and April, and stayed constant from April to last month, according to latest data from SRX Property.

Not only have prices stabilised, but more resale flats have also been sold this year. Except for March, the first five months this year saw higher resale volumes compared with last year.

Some experts believe the rise in transactions is a strong sign that prices are ready to bounce back soon.

"I was expecting the downward trend to continue," said ERA Realty key executive officer Eugene Lim. "But resale volume has crept up. It's a sign that more buyers are coming back into the market."

This is good news for sellers like technician Ken Quek, 41, who put his four-room Bukit Panjang flat on the market two weeks ago. "I was slightly worried about prices falling. We are upgrading to a five-room flat closer to my in-laws, so I was hoping to get a better price," said Mr Quek.

But Mr Lim and Mr Wong warned that monthly data tends to be more volatile than quarterly figures, and they do not rule out a further price slide.

"It could go down again, but this year's drop will be less than last year's," said Mr Lim.

According to SRX Property, resale prices have fallen by about 11 per cent since their peak in 2013.

Other experts are less optimistic about a market recovery.

"There is no catalyst to spur demand and raise prices," he said, adding that the higher resale volume could be supply-led because upgraders moving into new condominiums and BTO flats have to put their old flats on the market.

He added that resale prices have also yet to drop to levels before 2009, when property prices started to surge.

Experts point out that any price recovery would also depend on factors such as whether the Government relaxes cooling measures, and whether interest rates go up, as these will affect demand.

Said Mr Ong: "If we have stagnant prices for at least three months to half a year, then we know we have bottomed."

Except for March, the first five months this year saw higher resale volumes in the HDB market. In May, for example, some 1,575 flats were sold, up about 19 per cent from the 1,320 units sold last year. -- ST PHOTO: ALPHONSUS CHERN

BUYERS IN MARKET I was expecting the downward trend to continue... But resale volume has crept up. It's a sign that more buyers are coming back into the market.