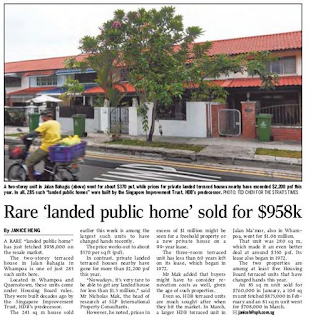 A RARE "landed public home" has just fetched $958,000 on the resale market.
The two-storey terraced house in Jalan Bahagia in Whampoa is one of just 285 such units here.
Located in Whampoa and Queenstown, these units come under Housing Board rules. They were built decades ago by the Singapore Improvement Trust, HDB's predecessor.
The 241 sq m house sold earlier this week is among the largest such units to have changed hands recently.
The price works out to about $370 per sq ft (psf).
In contrast, private landed terraced houses nearby have gone for more than $2,200 psf this year.
"Nowadays, it's very rare to be able to get any landed house for less than $1.5 million," said Mr Nicholas Mak, the head of research at SLP International Property Consultants.
However, he noted, prices in excess of $1 million might be seen for a freehold property or a new private house on a 99-year lease.
The three-room terraced unit has less than 60 years left on its lease, which began in 1972.
Mr Mak added that buyers might have to consider renovation costs as well, given the age of such properties.

A two-storey unit in Jalan Bahagia (above) went for about $370 psf, while prices for private landed terraced houses nearby have exceeded $2,200 psf this year. In all, 285 such "landed public homes" were built by the Singapore Improvement Trust, HDB's predecessor. -- PHOTO: TED CHEN FOR THE STRAITS TIMES