Sales of 2 condos at Sentosa Cove raise hopes of rebound. Adjacent units at The Oceanfront transacted in the $2,000 psf range 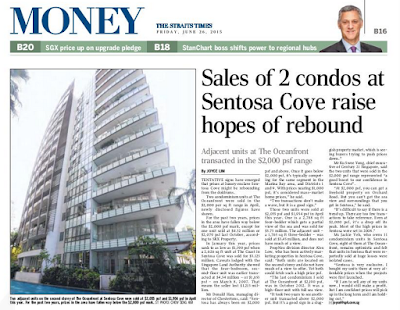 TENTATIVE signs have emerged that prices at luxury enclave Sentosa Cove might be rebounding from the doldrums.

Two condominium units at The Oceanfront were sold in the $2,000 per sq ft range in April, newly disclosed figures have shown.
For the past two years, prices in the area have fallen way below the $2,000 psf mark, except for one unit sold at $4.32 million or $2,079 psf last October, according to SRX Property.
In January this year, prices sank to as low as $1,190 psf when a 2,626 sq ft unit at The Coast in Sentosa Cove was sold for $3.125 million. Caveats lodged with the Singapore Land Authority showed that the four-bedroom, second-floor unit was earlier transacted at $4.34 million - or $1,653 psf - on March 8, 2007. That means the seller lost $1.215 million.
Mr Donald Han, managing director of Chestertons, said: "Sentosa has always been on $2,000 psf and above. Once it goes below $2,000 psf, it's typically competing for the same segment in the Marina Bay area, and Districts 1 and 9. With prices nearing $1,000 psf, it's considered mass-market home prices," he said.
"Two transactions don't make a wave, but it is a good sign."
Those two units were sold at $2,055 psf and $1,954 psf in April this year. One is a 2,788 sq ft four-bedder which gets a partial view of the sea and was sold for $5.73 million. The adjacent unit - a 1,765 sq ft three-bedder - was sold at $3.45 million, and does not have much of a view.
PropNex division director Alex Low, who has been actively marketing properties in Sentosa Cove, said: "Both units are located on the second storey and do not have much of a view to offer. Yet both could fetch such a high price psf.
"The last condominium I sold at The Oceanfront at $2,190 psf, was in October 2012. It was a high-floor unit with full sea view.
"It took two years to see another unit transacted above $2,000 psf. But it's a good sign in a sluggish property market, which is seeing buyers trying to push prices down."

Two adjacent units on the second storey of The Oceanfront at Sentosa Cove were sold at $2,055 psf and $1,954 psf in April. For the past two years, prices in the area have fallen way below the $2,000 psf mark. -- ST PHOTO: CHEW SENG KIM
Mr Ku Swee Yong, chief executive of Century 21 Singapore, said the two units that were sold in the $2,000 psf range represented "a good boost to our confidence in Sentosa Cove".
"At $2,000 psf, you can get a freehold property on Orchard Road. But you can't get the sea view and surroundings that you get in Sentosa," he said.
"It's difficult to say if there is a trend up. There are too few transactions to take reference. Even at $2,000 psf, it's a drop off its peak. Most of the high prices in Sentosa were set in 2008."
Ms Jackie Yeh, who owns 11 condominium units in Sentosa Cove, eight of them at The Oceanfront, remains optimistic and felt that units in Sentosa that were reportedly sold at huge losses were isolated cases.
"Sentosa is very exclusive. I bought my units there at very affordable prices when the projects were first launched.
"If I am to sell any of my units now, I would still make a profit. But I am confident prices will pick up in the long term and I am holding out."
The Straits Times / Money                                                       Published on Friday, 26 June 2015


Sales of 2 condos at Sentosa Cove raise hopes of rebound