Corridors of discontent at Pasir Ris One. They are within regulations but some find them a squeeze 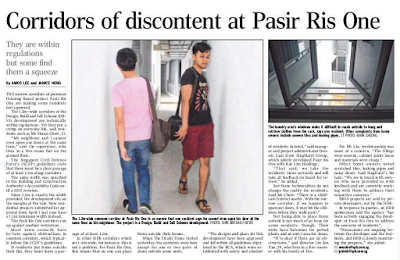 The laundry area's windows make it difficult to reach outside to hang and retrieve clothes from the rack, says one resident.


THE narrow corridors of premium Housing Board project Pasir Ris One are making some residents feel squeezed.
The 1.2m-wide corridors of the Design, Build and Sell Scheme (DBSS) development are technically within regulations. Yet they put a crimp on everyday life, said residents such as Mr Shaun Chew, 51.
"My neighbour and I cannot even open our doors at the same time," said the supervisor, who lives in a five-room flat on the ground floor.
The Singapore Civil Defence Force's (SCDF) guidelines state that there must be a clear passage of at least 1.2m along corridors.
The same width was specified in the Building and Construction Authority's Accessibility Code until a 2013 revision.
Since 1.2m is exactly the width provided, the development sits on the margins of the rule. New residential projects submitted for approval from April 1 last year have a 1.5m minimum width instead.
The Pasir Ris One corridors run up against another restriction.
Most town councils have by-laws against obstructions in common corridors, which typically follow the SCDF's guidelines.
If residents put items outside their flat, they must leave a passage of at least 1.2m.
In other HDB corridors which are 1.4m wide, for instance, this is not a problem. For Pasir Ris One, this means that no one can place items outside their homes.
When The Straits Times visited yesterday, the corridors were bare except for one or two pairs of shoes outside some units.
"The designs and plans for this development have been approved and fall within all guidelines stipulated by the BCA, which were established with safety and comfort of residents in mind," said manager and project administrator Dennis Lam from SingHaiyi Group, which jointly developed Pasir Ris One with Kay Lim Holdings.
"That said, we take the residents' views seriously and will take all feedback on board for review," he added.
But these technicalities do not change the reality for residents. Said Mr Chew: "There is a childcare (centre) nearby. With the narrow corridor, if we happen to open our doors, it may hit the children (when they walk past)."
Not being able to place items outside is not much of an issue for some residents, though. Their units have balconies for potted plants and an entry area for shoes.
"It is okay if there are no obstructions," said director Lin Jun Yao, 29, who lives in a five-roomer with his family of five.
For Mr Lin, workmanship was more of a concern. "The tilings were uneven, cabinet joints loose and materials were cheap."
Other home owners noted scratched tiles, leaking pipes and noisy doors. Said SingHaiyi's Mr Lam: "We are in touch with owners who have provided us with feedback and are currently working with them to address their respective concerns."
DBSS projects are sold by private developers, not by the HDB.
In response to queries, an HDB spokesman said the agency "has been actively engaging the developer of Pasir Ris One to address the concerns of residents".
"Discussions are ongoing between the developer and the residents, and HDB is closely monitoring the progress," she added.
The Straits Times/ Singapore                                                 Published on Thursday, 25 June 2015

By Amos Lee and Janice Heng


Corridors of discontent at Pasir Ris One