More details of new HDB scheme revealed. But 'Two-Room Flexi' policy will restrict buyers to leases based on age: Khaw 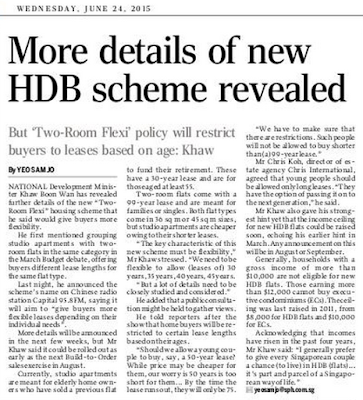 NATIONAL Development Minis-ter Khaw Boon Wan has revealed further details of the new "Two-Room Flexi" housing scheme that he said would give buyers more flexibility.
He first mentioned grouping studio apartments with two- room flats in the same category in the March Budget debate, offering buyers different lease lengths for the same flat type.
Last night, he announced the scheme's name on Chinese radio station Capital 95.8FM, saying it will aim to "give buyers more flexible leases depending on their individual needs".
More details will be announced in the next few weeks, but Mr Khaw said it could be rolled out as early as the next Build-to-Order sales exercise in August.
Currently, studio apartments are meant for elderly home owners who have sold a previous flat to fund their retirement. These have a 30-year lease and are for those aged at least 55.
Two-room flats come with a 99-year lease and are meant for families or singles. Both flat types come in 36 sq m or 45 sq m sizes, but studio apartments are cheaper owing to their shorter leases.
"The key characteristic of this new scheme must be flexibility," Mr Khaw stressed. "We need to be flexible to allow (leases of) 30 years, 35 years, 40 years, 45 years.
"But a lot of details need to be closely studied and considered."
He added that a public consultation might be held to gather views.
He told reporters after the show that home buyers will be restricted to certain lease lengths based on their ages.
"Should we allow a young couple to buy, say, a 50-year lease? While price may be cheaper for them, our worry is 50 years is too short for them... By the time the lease runs out, they will only be 75.
"We have to make sure that there are restrictions. Such people will not be allowed to buy shorter than (a) 99-year lease."
Mr Chris Koh, director of estate agency Chris International, agreed that young people should be allowed only long leases. "They have the option of passing it on to the next generation," he said.
Mr Khaw also gave his strongest hint yet that the income ceiling for new HDB flats could be raised soon, echoing his earlier hint in March. Any announcement on this will be in August or September.
Generally, households with a gross income of more than $10,000 are not eligible for new HDB flats. Those earning more than $12,000 cannot buy executive condominiums (ECs). The ceiling was last raised in 2011, from $8,000 for HDB flats and $10,000 for ECs.
Acknowledging that incomes have risen in the past four years, Mr Khaw said: "I generally prefer to give every Singaporean couple a chance (to live) in HDB (flats)... it's part and parcel of a Singaporean way of life."
The Straits Times / Top of The News                             Published on Wednesday, 24 June 2015