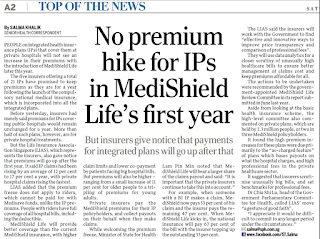 PEOPLE on integrated health insurance plans (IPs) that cover them at private hospitals will not see an increase in their premiums with the introduction of MediShield Life later this year.
The five insurers offering a total of 21 IPs have promised to keep premiums as they are for a year following the launch of the compulsory national medical insurance, which is incorporated into all the integrated plans.
Before yesterday, insurers had merely said premiums for IPs covering public hospitals would remain unchanged for a year. More than half of such plans, however, are for private hospital treatments.
But the Life Insurance Association Singapore (LIAS), which represents the insurers, also gave notice that premiums will go up after the first year. It said IP claims had been rising by an average of 12 per cent to 17 per cent a year, with private hospital claims rising the fastest.
LIAS added that the premium freeze does not apply to riders, which cannot be paid for with Medisave funds, unlike the IP premiums. People with riders have full coverage of all hospital bills, including the deductible.
MediShield Life will provide better coverage than the current MediShield insurance, with higher claim limits and lower co-payment by patients facing big hospital bills. But premiums will also be higher - ranging from a small increase of 11 per cent for older people to a tripling of premiums for young adults.
Private insurers pay the MediShield premiums for their IP policyholders, and collect payouts on their behalf when they make claims.
While welcoming the premium freeze, Minister of State for Health Lam Pin Min noted that MediShield Life will bear a larger share of the claims payout and said: "It is important that the private insurers continue to take this into account."
For example, when someone with a B1 IP makes a claim, MediShield now pays 53 per cent of his claim and the insurer pays the remaining 47 per cent. When MediShield Life kicks in, the national insurance will pay 67 per cent of the bill with the insurer topping up the outstanding 33 per cent.
The LIAS said the insurers will work with the Government to find "effective and innovative ways to improve price transparency and comparison of professional fees".
They will use data analytics for a closer scrutiny of unusually high healthcare bills to ensure better management of claims cost and keep premiums affordable for all.
The actions to be undertaken were recommended by the government-appointed MediShield Life Review Committee in its report submitted in June last year.
Aside from looking at the basic health insurance scheme, the high-level committee also commented on private plans, which are held by 2.3 million people, or two in three MediShield policyholders.
It found the high premium increases for these plans were due primarily to the "as-charged feature" of plans which bases payouts on what the hospital charges, and high professional fees in the private healthcare sector.
It suggested that insurers scrutinise unusually big bills, and set benchmarks for professional fees.
Dr Chia Shi Lu, head of the Government Parliamentary Committee for Health, called LIAS' move "a gesture of good faith".
"I appreciate it would be difficult to commit to any longer period under the circumstances."
The Straits Times /Singapore                                                             Published on Saturday, 27 June 2015
By Salma Khalik Senior Health Correspondent