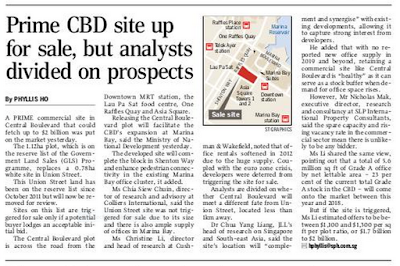 A PRIME commercial site in Central Boulevard that could fetch up to $2 billion was put on the market yesterday.
The 1.12ha plot, which is on the reserve list of the Government Land Sales (GLS) Programme, replaces a 0.78ha white site in Union Street.
This Union Street land has been on the reserve list since October 2011 but will now be removed for review.
Sites on this list are triggered for sale only if a potential buyer lodges an acceptable initial bid.
The Central Boulevard plot is across the road from the Downtown MRT station, the Lau Pa Sat food centre, One Raffles Quay and Asia Square.
Releasing the Central Boulevard plot will facilitate the CBD's expansion at Marina Bay, said the Ministry of National Development yesterday.
The developed site will complete the block in Shenton Way and enhance pedestrian connectivity in the existing Marina Bay office cluster, it added.
Ms Chia Siew Chuin, director of research and advisory at Colliers International, said the Union Street site was not triggered for sale due to its size and there is also ample supply of offices in Marina Bay.
Ms Christine Li, director and head of research at Cushman & Wakefield, noted that office rentals softened in 2012 due to the huge supply. Coupled with the euro zone crisis, developers were deterred from triggering the site for sale.
Analysts are divided on whether Central Boulevard will meet a different fate from Union Street, located less than 1km away. 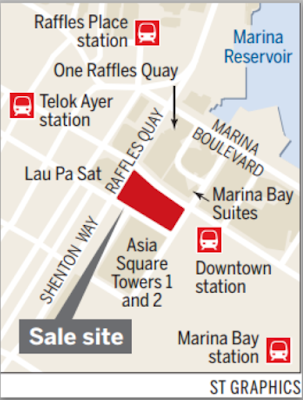 Dr Chua Yang Liang, JLL's head of research on Singapore and South-east Asia, said the site's location will "complement and synergise" with existing developments, allowing it to capture strong interest from developers.
He added that with no reported new office supply in 2019 and beyond, retaining a commercial site like Central Boulevard is "healthy" as it can serve as a stock buffer when demand for office space rises.
However, Mr Nicholas Mak, executive director, research and consultancy at SLP International Property Consultants, said the spare capacity and rising vacancy rate in the commercial sector mean there is unlikely to be any bidder.
Ms Li shared the same view, pointing out that a total of 5.6 million sq ft of Grade A office by net lettable area - 23 per cent of the current total Grade A stock in the CBD - will come onto the market between this year and 2018.
But if the site is triggered, Ms Li estimated offers to be between $1,100 and $1,300 per sf per plot ratio, or $1.7 billion to $2 billion.