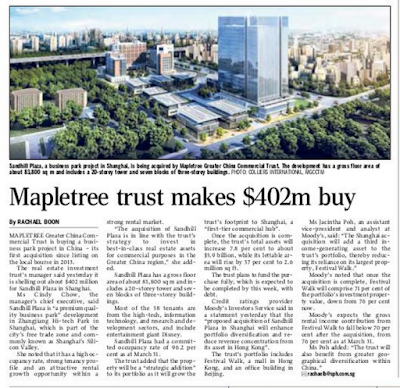 MAPLETREE Greater China Commercial Trust is buying a business park project in China - its first acquisition since listing on the local bourse in 2013.
The real estate investment trust's manager said yesterday it is shelling out about $402 million for Sandhill Plaza in Shanghai.
Ms Cindy Chow, the manager's chief executive, said Sandhill Plaza is "a premium quality business park" development in Zhangjiang Hi-tech Park in Shanghai, which is part of the city's free trade zone and commonly known as Shanghai's Silicon Valley.
She noted that it has a high occupancy rate, strong tenancy profile and an attractive rental growth opportunity within a strong rental market.
"The acquisition of Sandhill Plaza is in line with the trust's strategy to invest in best-in-class real estate assets for commercial purposes in the Greater China region," she added.