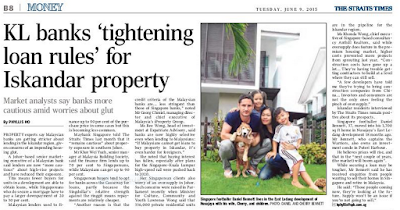 PROPERTY experts say Malaysian banks are getting stricter about lending in the Iskandar region, given concerns of an impending housing glut.

A Johor-based senior marketing executive of a Malaysian bank said lenders are now "more cautious" about high-rise projects and have reduced their exposure.

This means fewer buyers for units in a development are able to obtain loans, while Singaporeans who do secure a mortgage have to pay a larger downpayment of 20 to 30 per cent.

Malaysian lenders used to finance up to 90 per cent of the purchase price in some cases but this is becoming less common.

Maybank Singapore told The Straits Times last month that it "remains cautious" about property exposure in southern Johor. Mr Khor Wei Yueh, senior manager at Malaysia Building Society, said the finance firm lends up to 70 per cent to Singaporeans, while Malaysians can get up to 90 per cent.

Singaporean buyers tend to opt for banks across the Causeway for loans, partly because the Singdollar's relative strength against the ringgit means repayments are relatively cheaper.

Singapore footballer Daniel Bennett lives in the East Ledang development of Nusajaya with his wife, Cherry, and children. -- PHOTO: DANIEL AND CHERRY BENNETT

"Another reason is that the credit criteria of the Malaysian banks are... less stringent than those of Singapore banks," noted Mr Georg Chmiel, managing director and chief executive of Malaysia's iProperty Group.

Ms Bee Wong, head of investment at Expatriate Advisory, said banks are now highly selective even when lending to Malaysians: "If Malaysians cannot get loans to buy property in Iskandar, it's even harder for foreigners."

She noted that buying interest has fallen, especially after plans for the Singapore-Kuala Lumpur high-speed rail were pushed back to 2020. Her Singaporean clients also worry of an oversupply in Johor.

Such concerns were raised in Parliament recently when Minister for Culture, Community and Youth Lawrence Wong said that 336,000 private residential units are in the pipeline for the Iskandar region.

Ms Rhonda Wong, chief executive of Singapore-based consultancy Anthill Realtors, said while oversupply does feature in the premium housing market, higher costs prevented more projects from sprouting last year. "Construction costs have gone up a lot... They're having trouble getting contractors to build at a level where they can still sell.

"A few developers have told me they're trying to bring construction companies from China...
Investors and consumers are not the only ones feeling the pinch of oversupply."

Iskandar residents interviewed by The Straits Times remain positive about its prospects.

He believes prices will rise, and that in the "next couple of years, (the market) will boom again".

While securing a loan may be tougher, Mr Bennett said he has received enquiries from people wanting to sell their homes in Singapore and retire in Malaysia.

He said: "Those people coming now, they're looking at the future. Supply won't be an issue if you're not going to sell."