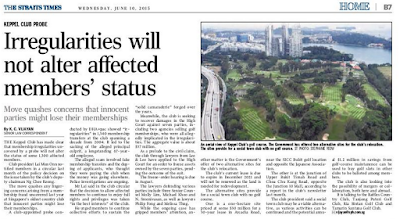 THE Keppel Club has made clear that membership irregularities uncovered by a probe will not alter the status of some 1,300 affected members.

The move quashes any lingering concerns arising from a membership fraud uncovered last year at Singapore's oldest country club that innocent parties might lose their memberships.

A club-appointed probe conducted by DHA+pac showed ''irregularities'' in 1,340 membership transfers at the club spanning a decade from 2004.

It led to the sacking of the alleged principal culprit, a longstanding 67-yearold employee.

The alleged scam involved fake membership transfers and the duping of applicants, who thought they were paying the club when the money was going elsewhere.

Police investigations are ongoing. Mr Lai said in the club circular that the decision to allow affected members to continue to enjoy full rights and privileges was taken ''in the best interests'' of the club.

He urged members to continue collective efforts to sustain the ''solid camaraderie'' forged over the years.

Meanwhile, the club is seeking to recover damages in the High Court against seven parties, including two agencies selling golf memberships, who were all allegedly implicated in the irregularities. The aggregate value is about $37 million.

As a prelude to the civil claim, the club through lawyers from Lee & Lee have applied to the High Court for an order to freeze assets owned by the seven parties, pending the outcome of the suit.

The freeze-order hearing is due in August. The lawyers defending various parties include three Senior Counsel Molly Lim, Michael Khoo and N. Sreenivasan, as well as lawyers Philip Fong and Melissa Thng.

An aerial view of Keppel Club’s golf course. The Government has offered two alternative sites for the club’s relocation. The sites provide for a social town club with no golf course. -- ST PHOTO: STEPHANIE YEOW

While the ongoing case has gripped members' attention, another matter is the Government's offer of two alternative sites for the club's relocation.

The club's current lease is due to expire in December 2021 and will not be renewed as the land is needed for redevelopment. The alternative sites provide for a social town club with no golf course.

One is a one-hectare site priced at some $30 million for a 30-year lease in Arcadia Road, near the SICC Bukit golf location and opposite the Japanese Association.

The other is at the junction of Upper Bukit Timah Road and Choa Chu Kang Road, opposite the Junction 10 Mall, according to a report in the club's newsletter last month.

The club president said a social town club may be a viable alternative, as various activities can be continued and the potential annual $1.2 million in savings from golf-course maintanence can be used to buy golf slots in other clubs to be balloted among members.

The club is also looking into the possibility of mergers or collaboration, both here and abroad. It is talking to the Raffles Country Club, Tanjong Puteri Golf Club, Ria Bintan Golf Club and Tamarin Santana Golf Club.