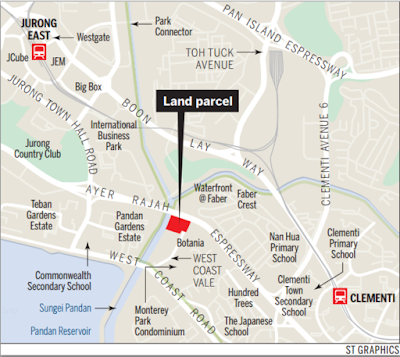 A RESIDENTIAL site at West Coast Vale was put on the market yesterday with price expectations of up to about $370 million.

The 18,908 sq m plot, which is on the confirmed list of the Government Land Sales (GLS) programme, is located on the Sungei Pandan waterfront.
Its maximum gross floor area of 52,945 sq m could yield about 595 residential units.
Analysts said there would be keen interest in the 99-year leasehold site.
Mr Desmond Lim, the head of research for Singapore and South-east Asia at CBRE, told The Straits Times: "While there has been a fall in the supply of land available for residential development, the same number of developers are still there."
Century 21 chief executive Ku Swee Yong noted that developers would be interested because of the amenities in the area, which will include the upcoming high-speed rail terminal in Jurong East.
"The area also has the new Science Centre, and the Westgate and Jem shopping malls," he said.
Recent developments there have fared quite well.
"Nine months ago, Waterfront @ Faber was launched. It has 210 units, with 135 already sold. That's more than 60 per cent, which is quite good," said Mr Ku.
Dr Chua Yang Liang, the head of research for JLL in South-east Asia, said: "Surrounding projects include The Infiniti and Hundred Trees, many of which have seen strong end-user demand, and have been fully sold.
"Many of the projects were launched in 2006 and 2007."
Mr Lim expects about 10 bidders for the West Coast Vale site, with offers exceeding $600 per sq ft (psf).
Mr Ku predicts five to eight bidders, offering $400 to $500 psf, made up mostly of "cash-rich listed developers who need to have land in the pipeline for future developments".
Dr Chua expects the bid price at $600 to $650 psf, noting that there could be higher building costs as the site is near water.
He added: "The negative is possibly the industrial estates to the west of the area. However, that is rather minor as they are fast-changing."
The tender closes at noon on Aug 4, said the Urban Redevelopment Authority yesterday.
The Straits Times / Money                        Published on Friday, 19 June 2015
By Fabian Koh                                          fabkoh@sph.com.sg
Sungei Pandan waterfront site may yield 600 homes