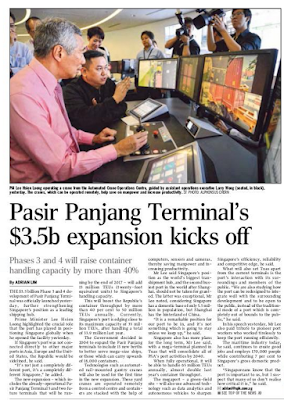 THE $3.5 billion Phase 3 and 4 development of Pasir Panjang Terminal was officially launched yesterday, further strengthening Singapore's position as a leading shipping hub.
Prime Minister Lee Hsien Loong highlighted the crucial role that the port has played in positioning Singapore globally when he opened the facility yesterday.
If Singapore's port was not connected directly to other major ports in Asia, Europe and the United States, the Republic would be sidelined, he said.
"It's not just a completely different port, it's a completely different Singapore," he added.
The new expansion - which includes the already-operational Pasir Panjang Terminal 5 and two future terminals that will be running by the end of 2017 - will add 15 million TEUs (twenty-foot equivalent units) to Singapore's handling capacity.
This will boost the Republic's container throughput by more than 40 per cent to 50 million TEUs annually. Currently, Singapore's port is edging close to its maximum capacity of 35 million TEUs, after handling a total of 33.9 million last year.
The Government decided in 2004 to expand the Pasir Panjang terminals to include 15 new berths to better serve mega-size ships, or those which can carry upwards of 18,000 containers.
Technologies such as automated rail-mounted gantry cranes will also be used for the first time in the new expansion. These yard cranes are operated remotely from a control centre and containers are stacked with the help of computers, sensors and cameras, thereby saving manpower and increasing productivity.

Mr Lee said Singapore's position as the world's biggest transhipment hub, and the second busiest port in the world after Shanghai, should not be taken for granted. The latter was exceptional, Mr Lee noted, considering Singapore has a domestic base of only 5.5 million in population, but Shanghai has the hinterland of China.
"It is a remarkable position for our port to be in, and it's not something which is going to stay unless we keep up," he said.
Singapore also has more plans for the long term, Mr Lee said, with a mega-terminal planned in Tuas that will consolidate all of PSA's port activities by 2040.
When fully operational, it will be able to handle 65 million TEUs annually, almost double last year's container throughput.
The megaport - a green-field site - will also use advanced technology such as data analytics and autonomous vehicles to sharpen Singapore's efficiency, reliability and competitive edge, he said.
What will also set Tuas apart from the current terminals is the port's interaction with its surroundings and members of the public. "We are also studying how the port can be redesigned to integrate well with the surrounding development and to be open to the public, instead of the traditional mode of a port which is completely out of bounds to the public," he said.
In his speech yesterday, Mr Lee also paid tribute to pioneer port workers who worked tirelessly to keep the port running efficiently.
The maritime industry today, he said, continues to create good jobs and employs 170,000 people while contributing 7 per cent to Singapore's gross domestic product.
"Singaporeans know that the port is important to us, but I suspect that many of us don't realise how critical it is," he said.
The Straits Times / Top of The News                                          Published on Wednesday, 24 June 2015