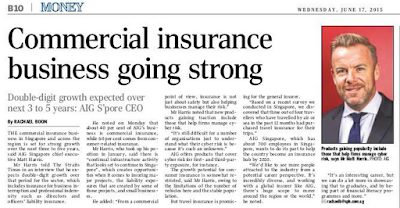 THE commercial insurance business in Singapore and across the region is set for strong growth over the next three to five years, said AIG Singapore chief executive Matt Harris.
Mr Harris told The Straits Times in an interview that he expects double-digit growth over that period for the sector, which includes insurance for business interruption and professional indemnity such as directors and officers' liability insurance.
He noted on Monday that about 40 per cent of AIG's business is commercial insurance, while 60 per cent comes from consumer-related insurance.
Mr Harris, who took up his position in January, said there is "continual infrastructure activity that looks set to continue in Singapore", which creates opportunities when it comes to insuring major projects, the liability exposures that are created by some of those projects, and small businesses.
He added: "From a commercial point of view, insurance is not just about safety but also helping businesses manage their risk."
Mr Harris noted that new products gaining traction include those that help firms manage cyber risk.
"It's still difficult for a number of organisations just to understand what their cyber risk is because it's such an unknown."