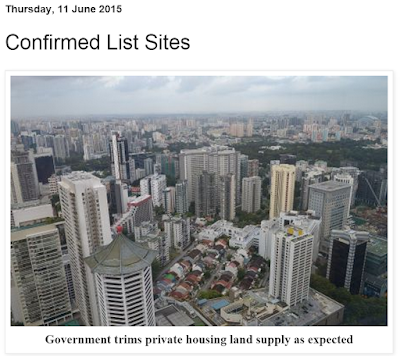 As expected, the Singapore government is continuing to trim the private residential land supply in the second half of the year, an indication that it expects the property market to continue to cool.

AS expected, the Singapore government is continuing to trim the private residential land supply in the second half of the year, an indication that it expects the property market to continue to cool.

The number of private residential units (including executive condos or ECs) across 17 confirmed and reserve list sites introduced this time - 7,825 - is 11 per cent fewer than in the first half and the lowest since H1 2007.

Only four residential sites (including one EC site) have been offered in the confirmed list - the lowest since 2009, when no sites were launched at the time of the financial crisis. The four sites, all in the city fringe and suburbs, can yield 2,130 units - the fewest since H2 2010.
Consultants read the supply slowdown as a sign that the authorities expect developers' demand for land to soften. The government has been steadily cutting land supply for private homes since H2 2010.
Chia Siew Chuin, Colliers' director of research and advisory, noted that 73 per cent of the residential units that have been put up in the second half are on the reserve list, up from 66 per cent in the first half.

"This is an indication of the government's commitment to reduce the use of the confirmed list, and to allow the reserve list to carry the bulk of the potential supply, letting the market decide whether more land for the development of residential units is needed," she said.

For some, like Chua Yang Liang, JLL's research head for Singapore and South-east Asia, these supply-side measures reflect the underlying market dynamics where the backlog of demand has been largely resolved.

The Urban Redevelopment Authority (URA) said a large pipeline supply of about 84,000 private residential units (including ECs) is coming in the next few years. This is not helped by the overall slow absorption at new launches.

The slowdown in state land sales is thus the government's way of balancing the real estate supply and demand dynamics in 2016 and 2017, said SLP International executive director Nicholas Mak.
Cushman & Wakefield research director Christine Li added: "The emphasis of the government has clearly shifted from keeping a lid on price growth to just maintaining sufficient supply to meet the long-term housing demand."

The rather severe 36 per cent cut in non-EC private housing supply to 1,610 units also shows the government's confidence that its demand-side cooling measures through stamp duties and loan curbs have worked, and that a turnaround in the residential market is not imminent, she said.

But in order not to create a situation where developers start to overbid too competitively for too few sites, a "respectable pipeline" still has to be ensured for developers keen on amassing land banks, said Desmond Sim, CBRE research head for Singapore and South-east Asia.

Of the four sites, developers are likely to be drawn to a 0.84-ha site in Alexandra View and a 1.93-ha site in Siglap Road for their proximity to Redhill MRT station and Siglap MRT station (on the upcoming Thomson-East Coast Line) respectively.

The Alexandra View plot comes with 2,000 sq m of commercial shops, which will help developers' cash flow, while the Siglap plot will enjoy a sea view.

There are no commercial or hotel sites on the confirmed list, but the reserve list has two commercial-cum-residential sites, two commercial sites and one white site (where a range of uses is allowed).

A new mixed-use site in Bukit Batok West Avenue 6 has been added, while there is no change to the list of commercial sites.

URA said the two Beach Road and Woodlands Square reserve list sites, predominantly for office developments, "will allow developers to initiate the development of more office space if they assess that there is demand".

A new white site in Marina Bay at Central Boulevard, sited between the two Asia Square towers and One Raffles Quay, has been added to the reserve list. It replaces a previous white site at Marina View/Union Street, which has had no takers since it was listed in October 2011. The URA said it will review development plans for the plot.