Most flaws in flats are 'surface imperfections'. They don't affect structural integrity and can be rectified easily, says HDB 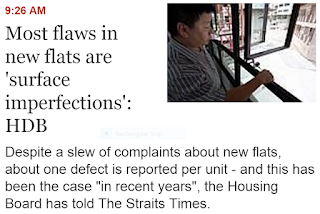 DESPITE a slew of complaints about new flats, about one defect is reported per unit - and this has been the case "in recent years", the Housing Board has told The Straits Times.
The bulk of reported flaws are "surface imperfections", such as hairline cracks, scratches on timber floors and uneven tile joints.
"This is due mainly to the inherent features of natural materials or the nature of construction works that are dependent on manual labour," an HDB spokesman said. She stressed that these defects do not affect the structural integrity of the building and can be rectified easily.
Last month, about a fifth of 850 households at a new Build-to-Order (BTO) project in Punggol raised concerns over cracks in their walls.
At another project in Bukit Panjang, residents said their tiles were rough and stained easily.
But HDB assured that it maintains "stringent quality practices" through multiple layers of checks.
For instance, timber mock-ups and sample units are built before mass construction to identify and resolve any design, safety and maintenance issues.
Auditors and inspection teams also comb the flats for defects, such as hollow tiles, uneven walls and wall cracks. Spotted flaws are relayed to contractors for rectification before flats are handed over to home owners.
Mr Thomas Seow, group director of HDB's building quality group, said: "We do checks during the design, construction and post-construction stages."
Experts told The Straits Times that minor defects are a common result of part of the construction process. These include doors not closing properly, leaking pipes, chipped tiles and surface cracks on walls.

A technical executive from HDB's inspection team checking a BTO flat in Hougang Crimson. HDB says it maintains "stringent quality practices" through multiple layers of checks. -- ST PHOTO: LAU FOOK KONG
"All newly completed buildings, be it private or HDB flats, will be bound to have some defects which need to be rectified," said Mr Chong Kee Sen, president of the Institution of Engineers Singapore. "You cannot expect a building to be built with 100 per cent perfection."
Mr Koh Kin Huat, senior project manager with Chip Eng Seng Contractors, said most resident complaints are "aesthetic".
He explained that wall cracks can occur when people move into buildings and there is a lot of vibration from renovation works. "These are just surface cracks. It will take about one year before it settles."
He said some defects, like chipped tiles, could also be due to human error. "A worker may bang a box of tiles while transporting it to a flat. He may not notice that they are chipped."
Mr David Kek, director of interior design firm Imposed Design, agreed that workmanship accounts for many of these defects: "Some workers may not be well-trained or there could be no supervisor on site to supervise them."
Industry players said it is unheard of for major structural defects, such as air pockets in concrete, to pass checks by the HDB and the Building and Construction Authority (BCA).
Home owners have a one-year defect liability period after collecting their keys to get faults rectified by the building contractor.
Since 2005, all BTO projects come with additional warranties to cover wall seepage, ceiling leaks and spalling concrete.
According to BCA guidelines, wall cracks and flooring scratches or chip-offs not visible from a distance of 1.5m are considered acceptable.
But China Construction general manager Toh Chee Boon noted that some home owners can be fussier. He said: "Defects are subjective - what are okay to some are unacceptable to others."
HDB cited an example of a resident who used a torchlight to examine his flat for flaws on his floor and wall tiles, and submitted a list of more than 100 defects.
"Most of the imperfections he reported are minor, such as paint stains on tiles, and excess sealant and paint stains on parquet."
But mould engineer Benson Teo, 48, who recently applied for a four-room BTO flat in Tampines, said: "It's a new flat which we are paying a lot for. There should not be these problems."
SEE FORUM
Steps taken to ensure quality
THE HDB has a framework of quality assurance checks that take place throughout the construction process. These include:
Contractors must adhere to the HDB's list of recommended building materials and equipment suppliers. This prevents use of substandard materials or equipment.
Wooden, life-size models of toilets, kitchens, air-con ledges and service yards must be erected on-site within three months of the contract award. This allows design, maintenance and safety issues to be resolved before construction begins.
Samples of actual units must be constructed for various flat types. Detailed information such as the location of electrical switches must be included. This provides quality control before mass construction begins.
The HDB deploys a central audit team to perform checks at various stages, which helps detect workmanship and quality problems. Project directors also make regular checks to ensure that work completed is consistent with approved drawings, specifications and work methods.
When a project is near completion, HDB sends the team to check for defects, such as improperly laid tiles or uneven walls. Any issues are relayed to the contractor for rectification. Once defects are fixed, another round of checks is made before the handover.
The Straits Times / Singapore                                            Published on Monday, 8 June 2015


Most flaws in flats are 'surface imperfections'