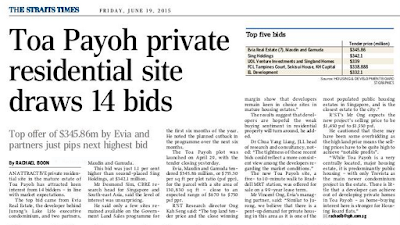 AN ATTRACTIVE private residential site in the mature estate of Toa Payoh has attracted keen interest from 14 bidders - in line with market expectations.
The top bid came from Evia Real Estate, the developer behind Jurong's Lake Life executive condominium, and two partners, Maxdin and Gamuda.
This bid was just 1.1 per cent higher than second-placed Sing Holdings, at $342.1 million.
Mr Desmond Sim, CBRE research head for Singapore and South-east Asia, said the level of interest was unsurprising.
He said only a few sites remained available on the Government Land Sales programme for the first six months of the year. He noted the planned cutback in the programme over the next six months.
The Toa Payoh plot was launched on April 29, with the tender closing yesterday.
Evia, Maxdin and Gamuda tendered $345.86 million, or $755.30 per sq ft per plot ratio (psf ppr), for the parcel with a site area of 130,830 sq ft - close to an expected range of $670 to $750 psf ppr.
R'ST Research director Ong Kah Seng said: "The top land tender price and the close winning margin show that developers remain keen in choice sites in mature housing estates."