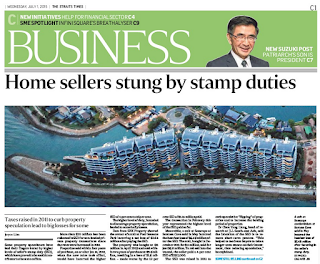 Some property speculators have had their fingers burnt by higher levels of seller's stamp duty (SSD), which have proved to be a solid contributor to the state coffers.
More than $70 million has been collected in SSD for non-landed private property transactions since the rates were increased in 2011.
Properties sold within four years of purchase, on or after Jan 14, 2011, when the new rates took effect, would have incurred the higher SSD of 4 per cent to 16 per cent.
The higher level of duty, intended to discourage property speculation, has led to some hefty losses.
Data from SRX Property showed the owner of a unit at Four Seasons Park incurring a net loss of $2.64 million after paying the SSD.