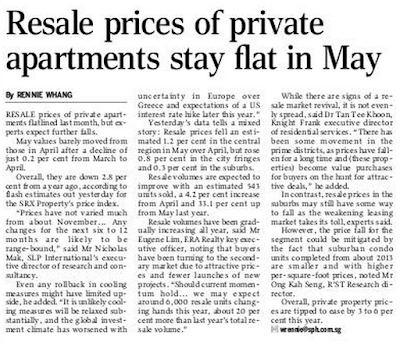 RESALE prices of private apartments flatlined last month, but experts expect further falls. May values barely moved from those in April after a decline of just 0.2 per cent from March to April.

Overall, they are down 2.8 per cent from a year ago, according to flash estimates out yesterday for the SRX Property's price index.

"Prices have not varied much from about November... Any changes for the next six to 12 months are likely to be range-bound," said Mr Nicholas Mak, SLP International's executive director of research and consultancy. Even any rollback in cooling measures might have limited upside, he added.

"It is unlikely cooling measures will be relaxed substantially, and the global investment climate has worsened with uncertainty in Europe over Greece and expectations of a US interest rate hike later this year."

Resale volumes are expected to improve with an estimated 543 units sold, a 4.2 per cent increase from April and 33.1 per cent up from May last year.

Resale volumes have been gradually increasing all year, said Mr Eugene Lim, ERA Realty key executive officer, noting that buyers have been turning to the secondary market due to attractive prices and fewer launches of new projects. "Should current momentum hold... we may expect around 6,000 resale units changing hands this year, about 20 per cent more than last year's total resale volume."

While there are signs of a resale market revival, it is not evenly spread, said Dr Tan Tee Khoon, Knight Frank executive director of residential services. "There has been some movement in the prime districts, as prices have fallen for a long time and (these properties) become value purchases for buyers on the hunt for attractive deals," he added.

In contrast, resale prices in the suburbs may still have some way to fall as the weakening leasing market takes its toll, experts said. However, the price fall for the segment could be mitigated by the fact that suburban condo units completed from about 2013 are smaller and with higher per-square-foot prices, noted Mr Ong Kah Seng, R'ST Research director.

Overall, private property prices are tipped to ease by 3 to 6 per cent this year.