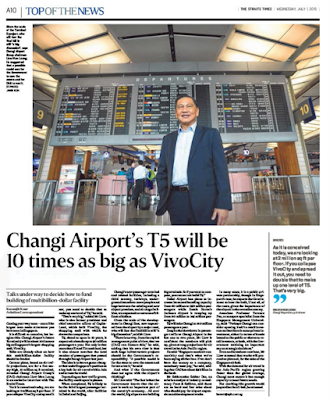 Coming your way soon - one of the largest man-made structures you have seen in Singapore.
It is difficult to conceive, but imagine this: Changi Airport's future Terminal 5 will be about 10 times as big as Singapore's largest shopping mall, VivoCity.
Talks are already afoot on how this multibillion-dollar facility should be funded.
Current plans, based on air traffic projections, are for a five-storey-high, 10 million sq ft terminal, revealed Changi Airport Group's (CAG) chairman Liew Mun Leong in an exclusive interview with The Straits Times.

UPSIZED
As it is conceived today, we are looking at 2 million sq ft per floor. If you collapse VivoCity and spread it out, you need to double that to make up one level of T5. That's very big.
MR LIEW MUN LEONG, Changi Airport Group chairman

"As it is conceived today, we are looking at 2 million sq ft per floor. If you collapse VivoCity and spread it out, you need to double that to make up one level of T5," he said.
"That's very big," added Mr Liew, who is also former president and chief executive officer of CapitaLand, which built VivoCity, the shopping mall with which he draws the comparison.
T5, slated to open in 10 years, is expected to handle up to 50 million passengers a year. Not only is that more than T1 and T2 combined, but it also almost matches the total number of passengers that passed through Changi Airport last year.
The idea is to have a game-changer that seals Singapore's position as a key hub for air travel within Asia and across the world.
Depending on how traffic grows, the facility could open in phases.
When completed, T5 is likely to be the third largest passenger terminal in the world, after facilities in Dubai and Beijing.
Changi's new passenger terminal and related facilities, including a third runway, taxiways, underground tunnels to move people and bags between the existing and new airport premises, and air cargo facilities, are expected to cost tens of billions of dollars.
Given the scale of the development in Changi East, now separated from the airport by a major road, who will foot the final bill is still "a big discussion", said Mr Liew.
"There is no way, from the capital management point of view, that we (CAG) can finance this," he said, adding that his own view is that such huge infrastructure projects should be the Government's responsibility. "A possible model is for the state to own the assets and for us to run it," he said.
And what if the Government does not agree with the airport's thinking?
Mr Liew said: "The fact is that the Government knows that the airport is such an important part of the country's economy... All over the world, big airports are building big terminals. So if you want to compete, you cannot not build T5."
Dubai Airport has plans to increase its annual handling capacity from 80 million to 250 million passengers while South Korea's Incheon Airport is ramping up from 80 million to 145 million passengers.
T5 will take Changi to 140 million passengers a year.
Despite the slowdown in passenger traffic at Changi Airport in the last one to two years, Mr Liew is confident the numbers will pick up, given strong projections for air travel in the Asia-Pacific region.
He said: "Singapore needs air connectivity and that's what we've been saying all the time. If we don't have the money as a company, somebody must pay," he said, adding that CAG has about $3 billion in the bank.
Mr Subhranshu Sekhar Das, an aviation analyst at industry consultancy Frost & Sullivan, said there are no hard and fast rules about who should pay for airport expansion and development works.
In many cases, it is a public-private partnership, though in Singa-pore's case, he expects the Government to bear the bulk, if not all, of the costs, given the importance of the airport to the overall economy.
Associate Professor Terence Fan, a transport specialist from the Singapore Management University, said: "Perhaps Changi can consider opening itself to retail investors so that there is some private investment, either in terms of bonds issued to the public or shares to retail investors, or both, with the Government retaining an important say on strategic decisions."
Even as discussions continue, Mr Liew stressed that works will proceed as planned, for the sake of the Singapore air hub.
With the demand for air travel in the Asia-Pacific region growing faster than the global average, Changi must ensure it has enough capacity to meet future needs.
Not catching this growth would jeopardise the air hub, he stressed.
The Straits Times /Top of The News                             Published on Tuesday, 30 June 2015        By Karamjit Kaur, Aviation Correspondent
Changi Airport's T5 will be 10 times as big as VivoCity