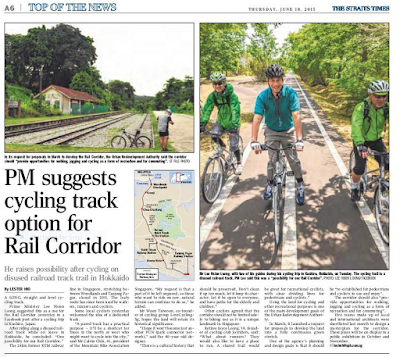 A LONG, straight and level cycling track.
Prime Minister Lee Hsien Loong suggested this as a use for the Rail Corridor yesterday in a Facebook post after a cycling trip in Kushiro, Japan.
After riding along a disused railroad track while on leave in Hokkaido, he concluded: "One possibility for our Rail Corridor."
The 24km former KTM railway line in Singapore, stretching between Woodlands and Tanjong Pagar, closed in 2011. The leafy route has since been used by walkers, runners and cyclists.
Some local cyclists yesterday welcomed the idea of a dedicated track.
"A paved track has a practical purpose - it'll be a shortcut for those in the north or west who might want to cycle into the city," said Mr Calvin Chin, 41, president of the Mountain Bike Association Singapore. "My request is that a part of it be left unpaved, so those who want to ride on raw, natural terrain can continue to do so," he added.
Mr Woon Taiwoon, co-founder of cycling group LoveCyclingSg, hopes the land will retain its historical significance.
"I hope it won't become just another PCN (park connector network)," said the 40-year-old designer.
"There is a cultural history that should be preserved. Don't clean it up too much, let it keep its character. Let it be open to everyone, and have paths for the elderly and children."
Other cyclists agreed that the corridor should not be limited solely to biking use as it is a unique landmark in Singapore.
Retiree Joyce Leong, 59, founder of cycling club Joyriders, said: "What about runners? They would also like to have a place to run. A shared trail would be great for recreational cyclists, with clear dividing lines for pedestrians and cyclists.
Using the land for cycling and other recreational purposes is one of the main development goals of the Urban Redevelopment Authority.
In March, it launched a request for proposals to develop the land into a fully continuous green stretch.
One of the agency's planning and design goals is that it should be "re-established for pedestrians and cyclists to use and enjoy".
The corridor should also "provide opportunities for walking, jogging and cycling as a form of recreation and for commuting".
Five teams made up of local and international architects were shortlisted last month to design a masterplan for the corridor. These plans will be on display in a public exhibition in October and November 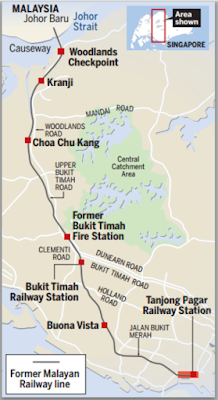 The Straits Times/ Top of The News