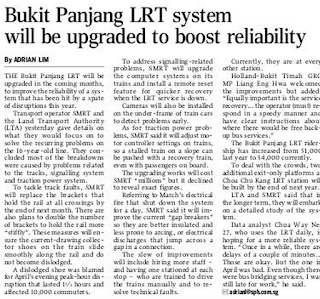 Train and track components on the Bukit Panjang LRT will be replaced and enhanced in the coming months, in a bid to improve the rail system's reliability, which has been hit by a spate of disruptions this year. -- ST PHOTO: MARK CHEONG

THE Bukit Panjang LRT will be upgraded in the coming months, to improve the reliability of a system that has been hit by a spate of disruptions this year.
Transport operator SMRT and the Land Transport Authority (LTA) yesterday gave details on what they would focus on to solve the recurring problems on the 16-year-old line. They concluded most of the breakdowns were caused by problems related to the tracks, signalling system and traction power system.
To tackle track faults, SMRT will replace the brackets that hold the rail at all crossings by the end of next month. There are also plans to double the number of brackets to hold the rail more "stiffly". These measures will ensure the current-drawing collector shoes on the train slide smoothly along the rail and do not become dislodged.
A dislodged shoe was blamed for April's evening peak-hour disruption that lasted 11/2 hours and affected 10,000 commuters.
To address signalling-related problems, SMRT will upgrade the computer systems on its trains and install a remote reset feature for quicker recovery when the LRT service is down.
Cameras will also be installed on the under-frame of train cars to detect problems early.
As for traction power problems, SMRT said it will adjust motor controller settings on trains, so a stalled train on a slope can be pushed with a recovery train, even with passengers on board.
The upgrading works will cost SMRT "millions" but it declined to reveal exact figures.
Referring to March's electrical fire that shut down the system for a day, SMRT said it will improve the current "gap breakers" so they are better insulated and less prone to arcing, or electrical discharges that jump across a gap in a connection.
The slew of improvements will include hiring more staff - and having one stationed at each stop - who are trained to drive the trains manually and to resolve technical faults.
Currently, they are at every other station.
Holland-Bukit Timah GRC MP Liang Eng Hwa welcomed the improvements but added: "Equally important is the service recovery... the operator (must) respond in a speedy manner and have clear instructions about where there would be free back- up bus services."
The Bukit Panjang LRT ridership has increased from 51,000 last year to 54,000 currently.
To deal with the crowds, two additional exit-only platforms at Choa Chu Kang LRT station will be built by the end of next year.
LTA and SMRT said that in the longer term, they will embark on a detailed study of the system.
Data analyst Chua Way Ne, 27, who uses the LRT daily, is hoping for a more reliable system. "Once in a while, there are delays of a couple of minutes... Those are okay. But the one in April was bad. Even though there were bus bridging services, I was still late for work," he said.
The Straits Times/Top of The New                                             Published on Friday, 26 June 2015


Cycling through the Rail Corridor