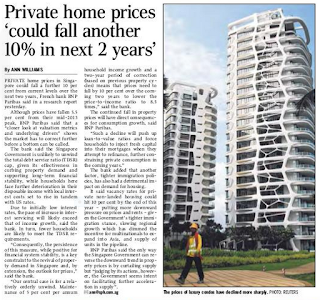 PRIVATE home prices in Singapore could fall a further 10 per cent from current levels over the next two years, French bank BNP Paribas said in a research report yesterday.
Although prices have fallen 5.5 per cent from their mid-2013 peak, BNP Paribas said that a "closer look at valuation metrics and underlying drivers" shows the market has to correct further before a bottom can be called.
The bank said the Singapore Government is unlikely to unwind the total debt service ratio (TDSR) cap, given its effectiveness in curbing property demand and supporting long-term financial stability, while households here face further deterioration in their disposable income with local interest costs set to rise in tandem with US rates.
Due to initially low interest rates, the pace of increase in interest servicing will likely exceed that of income growth, said the bank. In turn, fewer households are likely to meet the TDSR requirements.
"Consequently, the persistence of this measure, while positive for financial system stability, is a key constraint to the revival of property demand in Singapore and, by extension, the outlook for prices," said the bank.
"Our central case is for a relatively orderly unwind. Maintenance of 5 per cent per annum household income growth and a two-year period of correction (based on previous property cycles) means that prices need to fall by 10 per cent over the coming two years to lower the price-to-income ratio to 8.5 times," said the bank.


Private home prices 'could fall another 10% in next 2 years'