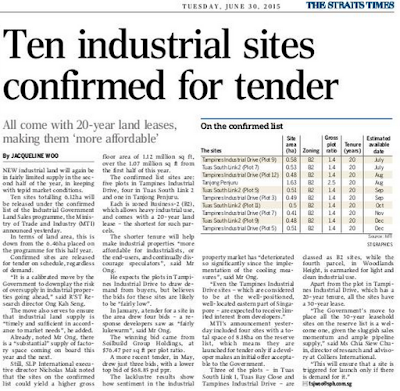 NEW industrial land will again be in fairly limited supply in the second half of the year, in keeping with tepid market conditions.
Ten sites totalling 6.12ha will be released under the confirmed list of the Industrial Government Land Sales programme, the Ministry of Trade and Industry (MTI) announced yesterday.
In terms of land area, this is down from the 6.46ha placed on the programme for this half year.
Confirmed sites are released for tender on schedule, regardless of demand.
"It is a calibrated move by the Government to downplay the risk of oversupply in industrial properties going ahead," said R'ST Research director Ong Kah Seng.
The move also serves to ensure that industrial land supply is "timely and sufficient in accordance to market needs", he added.
Already, noted Mr Ong, there is a "substantial" supply of factory space coming on board this year and the next.
Still, SLP International executive director Nicholas Mak noted that the sites on the confirmed list could yield a higher gross floor area of 1.12 million sq ft, over the 1.07 million sq ft from the first half of this year.
The confirmed list sites are: five plots in Tampines Industrial Drive, four in Tuas South Link 2 and one in Tanjong Penjuru.
Each is zoned Business-2 (B2), which allows heavy industrial use, and comes with a 20-year land lease - the shortest for such parcels.
The shorter tenure will help make industrial properties "more affordable for industrialists, or the end-users, and continually discourage speculators", said Mr Ong.
He expects the plots in Tampines Industrial Drive to draw demand from buyers, but believes the bids for these sites are likely to be "fairly low".
In January, a tender for a site in the area drew four bids - a response developers saw as "fairly lukewarm", said Mr Ong.
The winning bid came from Soilbuild Group Holdings, at $76.47 per sq ft per plot ratio.
A more recent tender, in May, drew just three bids, with a lower top bid of $68.85 psf ppr.
The lacklustre results show how sentiment in the industrial property market has "deteriorated so significantly since the implementation of the cooling measures", said Mr Ong.
"Even the Tampines Industrial Drive sites - which are considered to be at the well-positioned, well-located eastern part of Singapore - are expected to receive limited interest from developers."
MTI's announcement yesterday included four sites with a total space of 8.18ha on the reserve list, which means they are launched for tender only if a developer makes an initial offer acceptable to the Government.
Three of the plots - in Tuas South Link 1, Tuas Bay Close and Tampines Industrial Drive - are classed as B2 sites, while the fourth parcel, in Woodlands Height, is earmarked for light and clean industrial use.
Apart from the plot in Tampines Industrial Drive, which has a 20-year tenure, all the sites have a 30-year lease. 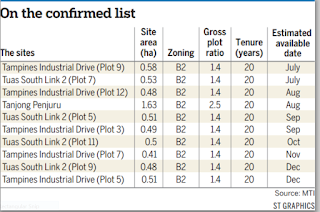