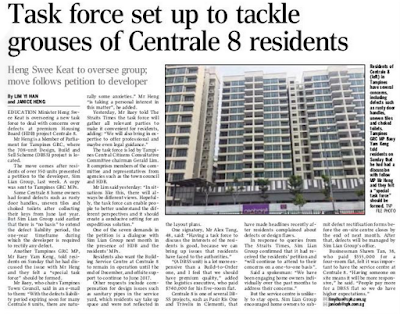 EDUCATION Minister Heng Swee Keat is overseeing a new task force to deal with concerns over defects at premium Housing Board (HDB) project Centrale 8.
Mr Heng is a Member of Parliament for Tampines GRC, where the 708-unit Design, Build and Sell Scheme (DBSS) project is located.
The move comes after residents of over 350 units presented a petition to the developer, Sim Lian Group, last week. A copy was sent to Tampines GRC MPs.
Some Centrale 8 home owners had found defects such as rusty door handles, uneven tiles and choked toilets after collecting their keys from June last year. But Sim Lian Group said earlier that there is "no basis" to extend the defect liability period, the one-year timeframe during which the developer is required to rectify any defect.
Another Tampines GRC MP, Mr Baey Yam Keng, told residents on Sunday that he had discussed the issue with Mr Heng and they felt a "special task force" should be formed.
Mr Baey, who chairs Tampines Town Council, said in an e-mail to them: "With the defects liability period expiring soon for many Centrale 8 units, there are naturally some anxieties." Mr Heng "is taking a personal interest in this matter", he added.
Yesterday, Mr Baey told The Straits Times the task force will gather all relevant parties to make it convenient for residents, adding: "We will also bring in expertise to offer professional and maybe even legal guidance."
The task force is led by Tampines Central Citizens Consultative Committee chairman Gerald Lim. It comprises members of the committee and representatives from agencies such as the town council and HDB.

Residents of Centrale 8 (above) in Tampines have several concerns, including defects such as rusty door handles, uneven tiles and choked toilets. Tampines GRC MP Baey Yam Keng told residents on Sunday that he had had a discussion with fellow MP Mr Heng and they felt a "special task force" should be formed. -- TNP FILE PHOTO
Mr Lim said yesterday: "In situations like this, there will always be different views. Hopefully, the task force can enable people to better understand the different perspectives and it should create a conducive setting for an expeditious solution."
One of the seven demands in the petition is a dialogue with Sim Lian Group next month in the presence of HDB and the residents' MPs.
Residents also want the Building Service Centre at Centrale 8 to remain in operation until the end of December, and offsite support to continue to June 2017.
Other requests include compensation for design issues such as sanitary pipes in the service yard, which residents say take up space and were not reflected in the layout plans.
One signatory, Mr Alex Tang, 48, said: "Having a task force to discuss the interests of the residents is good, because we can bring up issues that residents have faced to the authorities."
"(A DBSS unit) is a lot more expensive than a Build-to-Order one, and I feel that we should have premium quality," added the logistics executive, who paid $740,000 for his five-room flat.
Centrale 8 is one of several DBSS projects, such as Pasir Ris One and Trivelis in Clementi, that have made headlines recently after residents complained about defects or design flaws.
In response to queries from The Straits Times, Sim Lian Group confirmed that it had received the residents' petition and "will continue to attend to their concerns on a one-to-one basis".
Said a spokesman: "We have been engaging home owners individually over the past months to address their concerns."
But the service centre is unlikely to stay open. Sim Lian Group encouraged home owners to submit defect rectification forms before the on-site centre closes by the end of next month. After that, defects will be managed by Sim Lian Group's office.
Businessman Shawn Tan, 38, who paid $555,000 for a four-room flat, felt it was important to have the service centre at Centrale 8. "Having someone on site means it will be more responsive," he said. "People pay more for a DBSS flat so we do have higher expectations."
The Straits Times / Top of The News                                      Published on Friday, 26 June 2015


Task force set up to tackle grouses of Centrale 8 residents


Corridors of discontent at Pasir Ris One