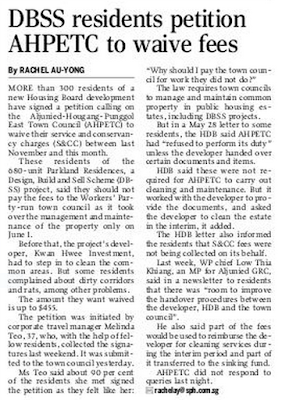 MORE than 300 residents of a new Housing Board development have signed a petition calling on the Aljunied-Hougang-Punggol East Town Council (AHPETC) to waive their service and conservancy charges (S&CC) between last November and this month.

These residents of the 680-unit Parkland Residences, a Design, Build and Sell Scheme (DBSS) project, said they should not pay the fees to the Workers' Party-run town council as it took over the management and maintenance of the property only on June 1.

Before that, the project's developer, Kwan Hwee Investment, had to step in to clean the common areas. But some residents complained about dirty corridors and rats, among other problems.

The amount they want waived is up to $455. The petition was initiated by corporate travel manager Melinda Teo, 37, who, with the help of fellow residents, collected the signatures last weekend.

It was submitted to the town council yesterday. Ms Teo said about 90 per cent of the residents she met signed the petition as they felt like her:

"Why should I pay the town council for work they did not do?" The law requires town councils to manage and maintain common property in public housing estates, including DBSS projects. But in a May 28 letter to some residents, the HDB said AHPETC had "refused to perform its duty" unless the developer handed over certain documents and items. HDB said these were not required for AHPETC to carry out cleaning and maintenance.

The HDB letter also informed the residents that S&CC fees were not being collected on its behalf.

Last week, WP chief Low Thia Khiang, an MP for Aljunied GRC, said in a newsletter to residents that there was "room to improve the handover procedures between the developer, HDB and the town council".

He also said part of the fees would be used to reimburse the developer for cleaning services during the interim period and part of it transferred to the sinking fund. AHPETC did not respond to queries last night.