Land supply cut further for second half of year. Move comes as experts warn of possible oversupply of homes 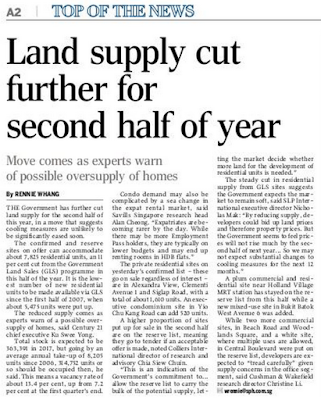 The Government has further cut land supply for the second half of this year, as experts warn of a possible oversupply of homes. -- ST FILE PHOTO

THE Government has further cut land supply for the second half of this year, in a move that suggests cooling measures are unlikely to be significantly eased soon.
The confirmed and reserve sites on offer can accommodate about 7,825 residential units, an 11 per cent cut from the Government Land Sales (GLS) programme in this half of the year. It is the lowest number of new residential units to be made available via GLS since the first half of 2007, when about 5,475 units were put up.
The reduced supply comes as experts warn of a possible oversupply of homes, said Century 21 chief executive Ku Swee Yong.
Total stock is expected to be 363,391 in 2017, but going by an average annual take-up of 8,205 units since 2006, 314,752 units or so should be occupied then, he said. This means a vacancy rate of about 13.4 per cent, up from 7.2 per cent at the first quarter's end.
Condo demand may also be complicated by a sea change in the expat rental market, said Savills Singapore research head Alan Cheong. "Expatriates are becoming rarer by the day. While there may be more Employment Pass holders, they are typically on lower budgets and may end up renting rooms in HDB flats."
The private residential sites on yesterday's confirmed list - these go on sale regardless of interest - are in Alexandra View, Clementi Avenue 1 and Siglap Road, with a total of about 1,610 units. An executive condominium site in Yio Chu Kang Road can add 520 units.
A higher proportion of sites put up for sale in the second half are on the reserve list, meaning they go to tender if an acceptable offer is made, noted Colliers International director of research and advisory Chia Siew Chuin.
"This is an indication of the Government's commitment to... allow the reserve list to carry the bulk of the potential supply, letting the market decide whether more land for the development of residential units is needed."
The steady cut in residential supply from GLS sites suggests the Government expects the market to remain soft, said SLP International executive director Nicholas Mak: "By reducing supply, developers could bid up land prices and therefore property prices. But the Government seems to feel prices will not rise much by the second half of next year... So we may not expect substantial changes to cooling measures for the next 12 months."
A plum commercial and residential site near Holland Village MRT station has stayed on the reserve list from this half while a new mixed-use site in Bukit Batok West Avenue 6 was added.
While two more commercial sites, in Beach Road and Woodlands Square, and a white site, where multiple uses are allowed, in Central Boulevard were put on the reserve list, developers are expected to "tread carefully" given supply concerns in the office segment, said Cushman & Wakefield research director Christine Li.
The Straits Times / Singapore                                                          Published on Friday, 12 June 2015


Land supply cut further for second half of year