Developers offer agents more to push sales. Commissions up from 0.5-1% to 2-3%, with some going much higher. 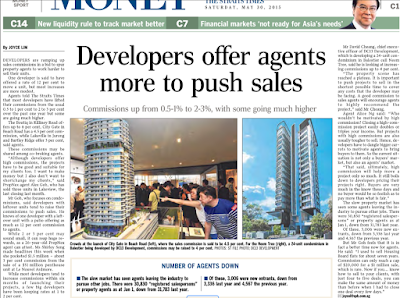 DEVELOPERS are ramping up sales commissions in a bid to spur property agents to work harder to sell their units.
One developer is said to have offered a rate of 12 per cent to move a unit, but most increases are more modest.
Agents told The Straits Times that most developers have lifted their commissions from the usual 0.5 to 1 per cent to 2 to 3 per cent over the past one year but some are going much higher.
The Boutiq in Killiney Road offers up to 6 per cent, City Gate in Beach Road has a 4.5 per cent commission, while Lakeville in Jurong and Bartley Ridge offer 3 per cent, said agents.
These commissions may be shared among co-broking agents.

Crowds at the launch of City Gate in Beach Road (above), where the sales commission is said to be 4.5 per cent. For the Neem Tree, a 24-unit condominium in Balestier being developed by DC13 Development, commissions may be raised to 4 per cent. -- PHOTO: DC13 DEVELOPMENT

"Although developers offer high commissions, the projects have to be good and suitable for my clients too. I want to make money but I also don't want to shortchange my clients," said PropNex agent Alex Goh, who has sold three units in Lakeview, the last closing last month.
Mr Goh, who focuses on condominiums, said developers with leftover units tend to raise their commissions to push sales. He knows of one developer with a leftover unit with a patio offering as much as 12 per cent commission to agents.
While 2 or 3 per cent may sound small, it can reap huge rewards, as a 26-year-old PropNex agent can attest. Ms Shirley Seng made headlines this week when she pocketed $1.5 million - about 3 per cent commission from the sale of a $51 million penthouse unit at Le Nouvel Ardmore.
While most developers tend to increase commissions within six months of launching their projects, a few big developers have been keeping rates at 1 to 2 per cent.

Crowds at the launch of City Gate in Beach Road, where the sales commission is said to be 4.5 per cent. For the Neem Tree (above), a 24-unit condominium in Balestier being developed by DC13 Development, commissions may be raised to 4 per cent. -- PHOTO: ST FILE PHOTO

Mr David Cheang, chief executive officer of DC13 Development, which is developing a 24-unit condominium in Balestier call Neem Tree, said he is looking at increasing commissions up to 4 per cent.
"The property scene has reached a plateau. It is important to push projects to sell in the shortest possible time to cover any costs that the developer may be facing. A good commission to sales agents will encourage agents to highly recommend the project," said Mr Cheang.
Agent Alice Ng said: "Who wouldn't be motivated by high commission? Closing a high-commission project easily doubles or triples your income. But projects with high commissions are also usually tougher to sell. Hence, developers have to dangle bigger carrots to motivate agents to bring buyers to them. So the current situation is not only a buyers' market, but also an agents' market.
"That said, ultimately, high commission will help move a project only so much. It still boils down to developers pricing their projects right. Buyers are very much in the know these days and no buyer would be so foolish as to pay more than what is fair."
The slow property market has seen some agents leaving the industry to pursue other jobs. There were 30,830 "registered salespersons" or property agents as atJan 1, down from 31,783 last year.
Of these, 3,006 were new entrants, down from 3,336 last year and 4,567 the previous year.
But Mr Goh feels that it is in fact a better time now for agents. He said: "I used to sell Housing Board flats for about seven years. Commission can only reach a cap of $20,000 for a $1 million sale, which is rare. Now if you... know how to sell to your clients, with just four to five deals, you can make the same amount of money than before when I had to close one deal every few days."