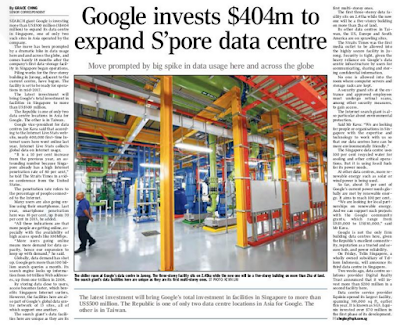 SEARCH giant Google is investing more than US$300 million (S$404 million) to expand its data centre in Singapore, one of only two such sites in Asia operated by the company.
The move has been prompted by a dramatic hike in data usage here and and across the globe, and comes barely 18 months after the company's first data-storage facility in Singapore began operations.
Piling works for the five-storey building in Jurong, adjacent to the current centre, have begun. The facility is set to be ready for operations in mid-2017.
The latest investment will bring Google's total investment in facilities in Singapore to more than US$500 million.
The Republic is one of only two data centre locations in Asia for Google. The other is in Taiwan.
Google vice-president for data centres Joe Kava said that according to the Internet Live Stats website, nearly 400,000 first-time Internet users here went online last year. Internet Live Stats collects global data on Internet usage.
"It is a 10 per cent increase from the previous year, an astounding number because Singapore already has a high Internet penetration rate of 80 per cent," he told The Straits Times in a video conference from the United States.
The penetration rate refers to the percentage of people connected to the Internet.
Many users are also going online using their smartphones. Last year, smartphone penetration here was 85 per cent, up from 70 per cent in 2013, he added.
"All these indications are that more people are getting online, especially with the availability of high access speeds like 100Mbps.
"More users going online means more demand for data capacity, hence our expansion to keep up with demand," he said.
Globally, data demand has shot up. Google gets more than 100 billion search queries a month. Its search engine looks up information from 60 trillion Web addresses, up from one trillion in 2008.
By storing data close to users, access becomes faster, which benefits Singapore Internet surfers. However, the facilities here are also part of Google's global data centre network of 13 sites, all of which support one another.
The search giant's data facilities here are unique as they are its first multi-storey ones.
The first three-storey data facility sits on 2.45ha while the new one will be a five-storey building on more than 2ha of land.
Its other data centres in Taiwan, the US, Europe and South America are on sprawling sites.
The Straits Times was the first media outlet to be allowed into the highly secure facility in Jurong. Security is tight, given the heavy reliance on Google's data centre infrastructure by users for communicating, sharing and storing confidential information.
No one is allowed into the room where computer servers and storage racks are kept.
A security guard sits at the entrance and approved employees must undergo retinal scans, among other security measures, to gain access.

The chiller room at Google's data centre in Jurong. The three-storey facility sits on 2.45ha while the new one will be a five-storey building on more than 2ha of land. The search giant's data facilities here are unique as they are its first multi-storey ones. -- ST PHOTO: KEVIN LIM

The Internet search giant is also particular about environmental protection.
Said Mr Kava: "We are looking for people or organisations in Singapore with the expertise and technology to work with us so that our data centres here can be more environmentally friendly."
The Singapore data centre uses 100 per cent recycled water for cooling and other critical operations. But it is using fossil fuels for its power needs.
At other data centres, more renewable energy such as solar or wind power is being used.
So far, about 35 per cent of Google's current power needs globally are met by renewable energy. It aims to reach 100 per cent.
"We are looking for local partnerships on renewable energy. And we can support such projects with the Google community grants, which range from US$5,000 to US$50,000," said Mr Kava.
Google is not the only firm building data centres here, given the Republic's excellent connectivity, reputation as a trusted and secure hub, and power reliability.
On Friday, Telin Singapore, a wholly owned subsidiary of Telkom Indonesia, will announce its third data centre in Singapore.
Two weeks ago, data centre solutions provider Digital Realty Trust announced that it will invest more than $200 million in a second facility here.
Data centre service provider Equinix opened its largest facility, spanning 385,000 sq ft, earlier this year. It is known as SG3. Equinix invested over $70 million in the first phase of its development.

The latest investment will bring Google's total investment in facilities in Singapore to more than US$500 million. The Republic is one of only two data centre locations in Asia for Google. The other is in Taiwan.
The Straits Times / Top of The News                                  Published on Tuesday, 2 June 2015
By Grace Chng, Senior Correspondent         chngkeg@sph.com.sg
Google invests $404m to expand S'pore data centre