Millionaire at 26 with just 1 deal. Poly grad chose profession against her family's wishes 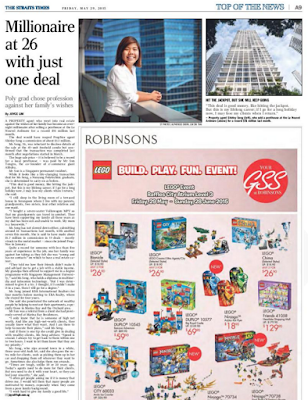 A PROPERTY agent who went into real estate against the wishes of her family has become an overnight millionaire after selling a penthouse at the Le Nouvel Ardmore for a record $51 million last month.
The deal would have reaped PropNex agent Shirley Seng a commission of about $1.5 million.
Ms Seng, 26, was reluctant to disclose details of the sale at the 43-unit freehold condo but confirmed that the transaction was completed last month after negotiations started in March.
The huge sale price - it is believed to be a record for a local penthouse - was paid by Mr Sun Tongyu, the co-founder of e-commerce giant Alibaba.
Mr Sun is a Singapore permanent resident.

While it looks like a life-changing transaction deal for Ms Seng, a Nanyang Polytechnic graduate, she is determined to carry on as before.
"This deal is good money, like hitting the jackpot. But this is my lifelong career; if I go for a long holiday now, I may lose my clients when I return," she said.
"I still sleep in the living room of a terraced house in Serangoon where I live with my parents, grandparents, two sisters, four other relatives and one maid.
"I bought a seven-seater Volkswagen MPV so that my grandparents can travel in comfort. They have been supporting my family all these years as my dad has been sick and unable to work. My mum is a housewife."
Ms Seng has not slowed down either, submitting around 16 transactions last month, with another seven this month. She is said to have made about $1.7 million in commission in 53 deals - mostly struck in the rental market - since she joined PropNex in January.
Quite a record for someone with less than five years of experience in the job, one her family was against her taking as they felt she was "young and has no contacts" on which to base a real estate career.
"They told me how their friends didn't make it and advised me to get a job with a stable income. My grandpa then offered to support me in a degree programme with Singapore Management University," said Ms Seng, who holds a diploma in multimedia and infocomm technology. "But I was determined to give it a try. I thought, if I couldn't make it in a year, then I will go for a degree."

Ms Seng joined HSR International Realtors for four months before moving to ERA Realty, where she stayed for four years.
She said she penetrated the network of wealthy people by helping to rent out their apartments, especially those in Marina Bay and the Orchard area.
Mr Sun was a referral from a client she had previously served at Marina Bay Residences.
"I only knew that he is someone of high net worth. And like any high-net-worth clients, they usually know what they want. And I am there to help to execute their plans," said Ms Seng.
And if there is one tip she could give in dealing with wealthy clients, Ms Seng advises: "Speed is crucial. I always try to get back to them within one to two hours. I want to let them know that they are my priority."
Ms Seng, who zips around town in a white, three-year-old Audi A4, said she also goes the extra mile for clients, such as picking them up in her car and dropping them off wherever they want to go. Sometimes she also helps them run errands.