NEW Housing Board flat prices are overestimated by the public, and the majority of prospective flat buyers are willing to pay more than the current average prices.
A new survey of more than 1,400 residents by the National Development Ministry showed that one in five of them intended to buy a flat in the next five years.
The issue of pricey new flats had been a rising concern in recent years, with National Development Minister Khaw Boon Wan promising to fix the issue when he first took charge of the ministry.
Measures such as delinking new flats from the resale market have brought prices down.
But perceptions that new Build-to-Order flats are expensive continue to linger, according to this survey conducted in November.
Last year, the average price of a four-room unit in a non-mature estate was $295,000.
A third of the respondents did not know how much such flats cost, while another four in 10 overestimated the price.
The most common estimate, chosen by 28 per cent, was between $300,001 and $400,000.
That price range is higher than the average and includes many of the priciest units. Last year, more than eight in 10 new four-room flats went for under $350,000.
Another 11 per cent thought such flats cost between $400,001 and $500,000, while 5 per cent thought they cost even more.
Of the other respondents, 19 per cent estimated a price of $200,001 to $300,000, and just 3 per cent thought they cost less.
The survey was conducted via telephone with 1,477 randomly selected Singapore residents aged 20 and above. The results were weighted to be representative.
It also found that those who intend to buy a flat in the next one to two years are largely willing to pay as much as or more than actual Build-to-Order prices in non-mature estates (see table).
For three-roomers, 45 per cent said they would pay $200,001 to $300,000. Another 13 per cent were willing to pay more.
The actual average price of such flats was $186,000 before government grants.
For four-room units, 26 per cent were willing to pay $300,001 to $400,000, while another 35 per cent would pay more.
The actual average price was $295,000 before grants.
More than half of the prospective buyers were also willing to pay more than the average five-room unit price of $391,000. 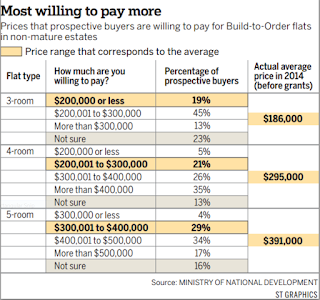