Signs of HDB resale market downturn nearing its end. Some analysts think the worst is over as prices stay flat in May. 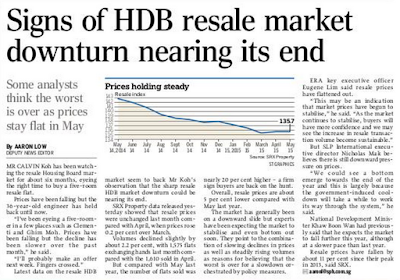 MR CALVIN Koh has been watching the resale Housing Board market for about six months, eyeing the right time to buy a five-room resale flat.

Prices have been falling but the 36-year-old engineer has held back until now.

"I've been eyeing a five-roomer in a few places such as Clementi and Ghim Moh. Prices have been falling but the decline has been slower over the past month," he said.

Volumes declined slightly by about 2.2 per cent, with 1,575 flats exchanging hands last month compared with the 1,610 sold in April.

But compared with May last year, the number of flats sold was nearly 20 per cent higher - a firm sign buyers are back on the hunt.

The market has generally been on a downward slide but experts have been expecting the market to stabilise and even bottom out soon. They point to the combination of slowing declines in prices as well as steadily rising volumes as reasons for believing that the worst is over for a slowdown orchestrated by policy measures.

Overall, resale prices are about 5 per cent lower compared with May last year.

"This may be an indication that market prices have begun to stabilise," he said. "As the market continues to stabilise, buyers will have more confidence and we may see the increase in resale transaction volume become sustainable."

"We could see a bottom emerge towards the end of the year and this is largely because the government-induced cooldown will take a while to work its way through the system," he said.

National Development Minister Khaw Boon Wan had previously said that he expects the market to fall further this year, although at a slower pace than last year.

Resale prices have fallen by about 11 per cent since their peak in 2013, said SRX.