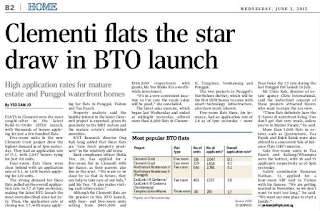 An artist's impression of Clementi Crest. Five-room units in the new Build-to-Order project drew the highest demand yesterday. They had an application rate of 13.1, with 2,047 buyers vying for just 156 units. -- PHOTO: HDB


FLATS in Clementi were the most sought-after in the latest Build-to-Order (BTO) launch, with thousands of buyers applying for just a few hundred flats.
Five-room units in the new Clementi Crest project drew the highest demand as of 5pm yesterday. They had an application rate of 13.1, with 2,047 buyers vying for just 156 units.
Four-room flats there were close behind with an application rate of 8.1, or 1,858 buyers applying for 229 units. 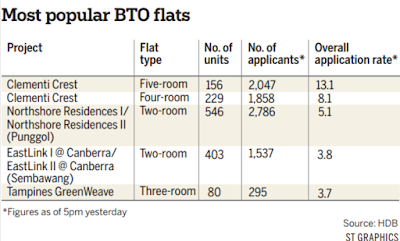 The strong demand for these flats pulled up the overall application rate to 3.7 at 5pm yesterday, making the latest BTO launch the most oversubscribed since last July. Then, the application rate at closing was 3.7, with many applying for flats in Punggol, Yishun and Toa Payoh.
Property analysts said the healthy interest in the latest Clementi project is expected, given its proximity to the MRT station and the mature estate's established amenities.
R'ST Research director Ong Kah Seng added that these flats are "rare fresh property products" in the relatively old town.
Bank compliance officer Sheila Yeo, 26, has applied for a five-room flat in Clementi with her fiance, as their parents also live in the west. "We want to be close by so that in future, they can help to take care of our kids," said Ms Yeo. "It also makes visiting each other easier."
Although the Clementi flats are the priciest in this BTO launch, with four- and five-room units selling from $463,000 and $566,000 respectively with grants, Ms Yeo thinks it is a worthwhile investment.
"It's in a very convenient location so I'm sure the resale value will be good," she concluded.
The latest sales exercise, which began last Wednesday and ended at midnight yesterday, offered more than 4,000 flats in Clementi, Tampines, Sembawang and Punggol.
The two projects in Punggol's Northshore district, which will be the first HDB homes to come with smart-technology infrastructure, also drew much interest.
Five-room flats there, for instance, had an application rate of 2.8 as of 5pm yesterday - more than twice the 1.3 rate during the last Punggol flat launch in July.
Mr Chris Koh, director of estate agency Chris International, said the waterfront concept of these projects attracted buyers who want to enjoy the sea view.
"These flats definitely have the X-factor of waterfront living. You don't get that very much, unless you're in Marine Parade," he said.
More than 5,000 flats in estates such as Queenstown, Toa Payoh and Bukit Batok were also offered in a concurrent Sale of Balance Flats (SBF) exercise.
Sole five-room units in Toa Payoh and Kallang/Whampoa were the hottest, with 58 and 55 applicants respectively as of 5pm yesterday.
Safety coordinator Kumaran Nathan, 33, applied for a four-room SBF unit in Yishun with his fiancee. "We are getting married in November, so we don't want to wait too long," he said. "We want our own place to start a family."
The Straits Times / Home                     Published on Wed, 3 June 2015
By Yeo Sam Jo                                     yeosamjo@sph.com.sg
Clementi flats the star draw in BTO launch


Eye on Lavender: Transformation in progress