Jurong Town Hall 'a baby' among national monuments. NHB says it was built during nascent years of 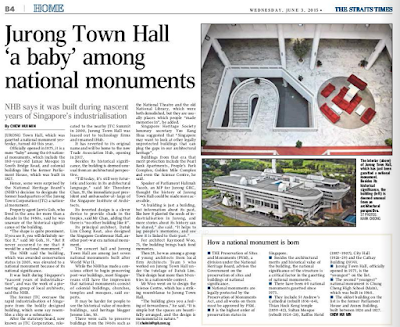 JURONG Town Hall, which was gazetted a national monument yesterday, turned 40 this year.
Officially opened in 1975, it is a mere "baby" among the 69 national monuments, which include the 180-year-old Jamae Mosque in South Bridge Road, and colonial buildings like the former Parliament House, which was built in 1827.

Hence, some were surprised by the National Heritage Board's (NHB's) decision to designate the former headquarters of the Jurong Town Corporation (JTC) a national monument.

Property agent Jarvis Goh, who lived in the area for more than a decade in the 1980s, said he was unaware of the historical significance of the building.

"The shape is quite prominent. If you see it, you will definitely notice it," said Mr Goh, 35. "But it never occurred to me that it would be a national monument."

The interior (above) of Jurong Town Hall, which has just been gazetted a national monument. Besides its historical significance, the building is deemed unusual from an architectural perspective. -- ST PHOTOS: MARK CHEONG

The NHB said the building, which was awarded conservation status in 2005, was elevated to a national monument because of its national significance.

It was built during Singapore's "nascent years of industrialisation", and was the work of a pioneering group of local architects, said the NHB.

The former JTC oversaw the rapid industrialisation of Singapore from the boldly designed building, which some say resembles a ship or a submarine.

After the statutory board, now known as JTC Corporation, relocated to the nearby JTC Summit in 2000, Jurong Town Hall was leased out to technology firms and renamed iHub.

It has reverted to its original name and will be home to the new Trade Association Hub, opening in 2017.

Besides its historical significance, the building is deemed unusual from an architectural perspective.
"Till today, it's still very futuristic and iconic in its architectural language," said Mr Theodore Chan, 55, the immediate past president and ambassador-at-large of the Singapore Institute of Architects.
Its inverted design is a clever device to provide shade in the tropics, said Mr Chan, adding that there is "no other building like it".

While the NHB has made a conscious effort to begin preserving post-war buildings, most Singaporeans still have the impression that national monuments consist of colonial buildings, churches, temples and mosques, said experts.

It may be harder for people to see the historical value of modern buildings, said heritage blogger Jerome Lim, 50.

There were calls to preserve buildings from the 1960s such as the National Theatre and the old National Library, which were both demolished, but they are usually places which people "made memories in", he added.

Singapore Heritage Society honorary secretary Yeo Kang Shua suggested that "Singapore may want to look at other legally unprotected buildings that can plug the gaps in our architectural heritage".

Buildings from that era that merit protection include the Pearl Bank Apartments, People's Park Complex, Golden Mile Complex and even the Science Centre, he said.

Speaker of Parliament Halimah Yacob, an MP for Jurong GRC, thought the history of Jurong Town Hall could be made more accessible.

"A building is just a building, but information about its past, like how it planted the seeds of industrialisation in Jurong, and more stories about its history can be shared," she said. "It helps to jog people's memories, and see how it is linked to their past."

For architect Raymond Woo, 75, the building brings back fond memories.

Then 28, he was among a group of young architects from local firm Architects Team 3 who worked on Jurong Town Hall under the tutelage of Datuk Lim. Their design beat more than 30 entries in a nationwide contest.

Mr Woo went on to design the Science Centre, which has a striking resemblance to Jurong Town Hall.

"The building gives you a feeling of forwardness," he said. "It is simple but the spaces are beautifully arranged, and the design is monumental in nature."