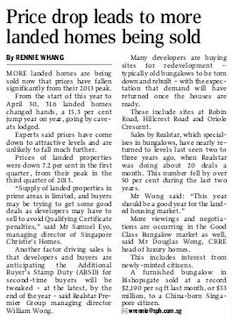 MORE landed homes are being sold now that prices have fallen significantly from their 2013 peak.
From the start of this year to April 30, 316 landed homes changed hands, a 15.3 per cent jump year on year, going by caveats lodged.
Experts said prices have come down to attractive levels and are unlikely to fall much further.
Prices of landed properties were down 7.2 per cent in the first quarter, from their peak in the third quarter of 2013.
"Supply of landed properties in prime areas is limited, and buyers may be trying to get some good deals as developers may have to sell to avoid Qualifying Certificate penalties," said Mr Samuel Eyo, managing director of Singapore Christie's Homes.
Another factor driving sales is that developers and buyers are anticipating the Additional Buyer's Stamp Duty (ABSD) for second-time buyers will be tweaked - at the latest, by the end of the year - said Realstar Premier Group managing director William Wong.
Many developers are buying sites for redevelopment - typically old bungalows to be torn down and rebuilt - with the expectation that demand will have returned once the houses are ready.
These include sites at Robin Road, Hillcrest Road and Oriole Crescent.
Sales by Realstar, which specialises in bungalows, have nearly returned to levels last seen two to three years ago, when Realstar was doing about 20 deals a month. This number fell by over 50 per cent during the last two years.
Mr Wong said: "This year should be a good year for the landed housing market."
More viewings and negotiations are occurring in the Good Class Bungalow market as well, said Mr Douglas Wong, CBRE head of luxury homes.
This includes interest from newly-minted citizens.
A furnished bungalow in Bishopsgate sold at a record $2,190 per sq ft last month, or $33 million, to a China-born Singapore citizen.
The Straits Times / Money                                            Published on Wed, 3 June 2015
By Rennie Whang                                                        wrennie@sph.com.sg
Price drop leads to more landed homes being sold