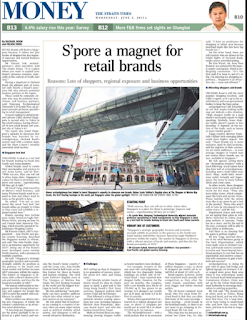 RETAIL brands still flock to Singapore because it offers not just hordes of shoppers but also regional exposure and myriad business opportunities.
Mr Vincent Soh, orchard-gateway's chief executive, told The Straits Times: "It is a place where you want to expand your brand's presence overseas, especially in the context of South-east Asia."
Having a shopfront in Orchard Road, the glitziest part of town, not only boosts a brand's presence but also attracts potential business partners in the region.
These could be corporate clients who may be potential franchisees and business partners, said Nanyang Technological University's Dr Lynda Wee, an adjunct associate professor specialising in retail management.
A recent ranking by global property adviser CBRE showed Singapore is second only to Tokyo in the retail business, having attracted 58 new retail brands last year, just shy of Tokyo's 63.

Above: orchardgateway has helped to boost Singapore's capacity to showcase new brands. -- PHOTO: LIM YAOHUI FOR THE STRAITS TIMES
SINGAPORE is ideal as a test bed for brands looking to break into South-east Asian markets.
Global brands need to curate their merchandise and services to suit Asian tastes, said Dr Wee. "With success, they can roll out to other Asian cities. Singapore is a place for them to prototype, improve and curate... experimenting till they get it right."
Mr David Tang, chief executive of Metro's retail business, said many Western brands want to expand in Asia and others want to come as the growth is here.
He added: "I'm not so sure about the word 'test bed' but brands either go straight to China or they come and establish a regional market here."

Above: Louis Vuitton's flagship store at The Shoppes at Marina Bay Sands, the first floating boutique in the world, put Singapore under the global spotlight. -- PHOTO: ST FILE

STARTING POINT
"With success, they can roll out to other Asian cities.
Singapore is a place for them to prototype, improve and curate... experimenting till they get it right."
- Dr Lynda Wee, Nanyang Technological University adjunct associate professor specialising in retail management, on how Singapore is ideal as a test bed for brands looking to break into South-east Asian markets
VIBRANT MIX OF CUSTOMERS
"Singapore's strategic geographic location and economic strength solidify its position as the gateway to the South-east Asian market and further increase American Eagle Outfitters' presence within the region. The market in Singapore is diverse, with a vibrant mixture of locals and tourists, and thus fits the brand personality of AEO."
- Mr Kareem Gahed, American Eagle Outfitters' vice-president - Asia-Pacific and global country licensing
The Straits Times / Money                                Published on Wed, 3 June 2015

By Rachael Boon And Felicia Choo