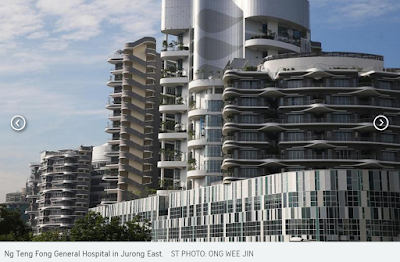 SINGAPORE - The new Ng Teng Fong General Hospital (NTFGH) opened its doors on Tuesday (June 30).
Originally slated to open in December last year, the opening was pushed back by six months due to construction delays.
Staff from Alexandra hospital, which closed for renovation on Monday, run both the general hospital and the adjoining 400-bed Jurong Community Hospital. The two hospitals cost $1 billion to build.
At the general hospital, patients can look forward to having a view with greenery outside, more natural lighting and better ventilation.

1. THE MAN IT'S NAMED AFTER

Property tycoon Ng Teng Fong was the founder of Far East Organisation and the Sino Group in Hong Kong.
Known as the "King of Orchard Road", he developed a number of shopping centres in the central shopping belt, including Far East Plaza and Lucky Plaza. He was Singapore's richest man when he died in 2010.
His family donated $125 million to the hospital, and the name change was announced in Parliament in March 2011. The hospital was originally named Jurong General Hospital.

2. WHAT DOES THE HOSPITAL SPECIALISE IN?

The hospital expects to treat a fair number of industrial accident cases, given the large industrial area nearby, including shipyards and oil refineries.
"Of concern is our backyard - the heavy industries, and Jurong Island just next to us, and of course the emerging elderly population," said Dr Quek Lit Sin, head of emergency medicine at JurongHealth.

Specialist outpatient clinics at the Ng Teng Fong General Hospital will be housed in an eight-storey tower, while inpatient services will be in a separate building. The nearby Jurong Community Hospital (JCH) will be located in another 12-storey building.
All three buildings will be connected via link bridges. However, for infection control purposes, patients and hospital staff will use bridges on Level 3, while the general public will use those on Level 2.

There will be 700 acute beds, with an additional 400 beds from JCH. About six in 10 of the acute beds are subsidised, in Class B2 or C wards.
The older, larger public hospitals, such as the Singapore General Hospital, typically have more than 1,000 beds. However, very few of them have step-down care community hospital facilities so conveniently available.

5. ONE QUEUE NUMBER, AND ONE BILL

At the hospital's specialist outpatient clinics, patients will use the same queue number throughout the visit - at every clinic and service point. Payment for all services will be consolidated into one bill at the end.

The intensive care and high-dependency units will be merged, instead of separated as they are in most hospitals. This means that patients will be cared for by the same team, lowering the chance of medical errors. Stable patients can also be wheeled out to outdoor gardens on the same floor.

The hospital's accident and emergency (A&E) department combines registration, triage, and consultation, which, hopefully, will shorten waiting time.
Patients who do not need to be warded will also be able to collect their medication and make payment at the same time.
In most hospitals, these are typically broken down into separate steps, which contributes towards long waiting times.

The hospital's ward towers are built in an East-West orientation, which takes advantage of prevailing winds to provide ventilation.
Sun angles were studied over a year to make sure ward rooms would receive the optimum amount of daylight without too much glare. For example, light shelves above ward windows were constructed to provide shade.

9. A WINDOW FOR EVERY BED

The wards have a fan-shaped design, allowing each bed to be placed next to a window with greenery outside. The design improves ventilation and natural light, and can help to speed up a patient's recovery.
This is a first for a public hospital, as most existing hospital wards are rectangular, with windows only at the end of the room.

The hospital's internal hot water supply and energy for landscape lighting will be provided by solar energy.
Harvested rainwater will be the main source of irrigation for its rooftop gardens, while Newater will be used in the cooling towers of its air-conditioning system.
It is estimated that the energy saved could power nearly 4,000 five-room HDB flats for a year, while the water saved could fill about 27 Olympic-sized swimming pools.