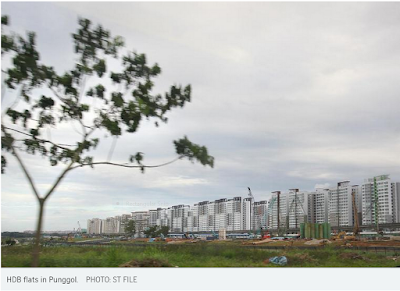 With the slump in the resale property market, it might be unexpected for Build-To-Order (BTO) flats to fetch more than twice their original price.
But a closer look shows little cause for surprise - and little cause to expect that the success will be fully replicated, for a few reasons.
One is that early owners of BTO homes benefited from especially low launch prices.
Their gains may not be realised by those who bought their flats later, for much more money.
The first BTO launches, in the early 2000s, came amid a weak resale market. They were priced low to entice buyers who might have seen the projects as far-flung and in underdeveloped areas, said R'ST Research director Ong Kah Seng.
The last time BTO prices were a talking point was during the 2011 General Election, when unhappiness over their perceived unaffordability made them a hot topic. So the real test will be when units launched in the late 2000s, which were priced much higher than the first few batches, eventually hit the market.
From the start of the BTO scheme in 2002 till 2011, resale prices nearly doubled. And BTO prices, which used to be linked to the resale market, were also pulled up.
In the Housing Board's 2006-2007 financial year, for instance, new Punggol four-roomers in BTO launches cost $173,000 to $254,000. Two years later, in 2008-2009, this rose to between $223,000 and $327,000.
When these newer flats start being resold in a year or two, the market by that time is expected to be much weaker than it was for earlier BTO projects that went on the resale market.
"A surge in resale prices over the next few years is not likely," noted OrangeTee research manager Wong Xian Yang.
In the first quarter of this year, for instance, the median resale price of a four-room HDB flat in Punggol was $430,000. This is not expected to rise much in the near future.
SLP International Property Consultants head of research Nicholas Mak said later BTO projects in far-flung areas such as Punggol, with selling prices of around $250,000, could still at least double in value.
But that is unlikely for later BTO projects in sought-after estates.
He highlighted a 2012 BTO project in Bendemeer Road with four-room flats sold for $467,000 to $595,000. At such prices, they would have to fetch more than a million dollars on the resale market to double their value.
Early BTO projects benefited from both low launch prices and a buoyant resale market.
With the Government now keen to contain resale prices, the stellar resale performance of early BTO projects should not be taken as a benchmark for the future.
The Straits Times/ Singapore                                                         Published on Tuesday, 7 July 2015 By Janice Heng                                                            Less starry resale outlook for newer BTO flats