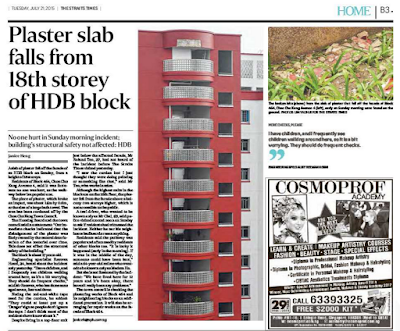 No one hurt in Sunday morning incident; building's structural safety not affected: HDB

A slab of plaster fell off the facade of an HDB block on Sunday, from a height of 18 storeys.
Residents of Block 464, Choa Chu Kang Avenue 4, said it was fortunate no one was hurt, as the walkway below is a popular one.
The piece of plaster, which broke on impact, was about 1.5m by 0.6m, or the size of a large bath towel. The area has been cordoned off by the Chua Chu Kang Town Council.

The Housing Board and the town council said in a statement: "Our immediate checks indicated that the dislodgement of the plaster was likely caused by the natural deterioration of the material over time. This does not affect the structural safety of the building."
The block is about 17 years old. 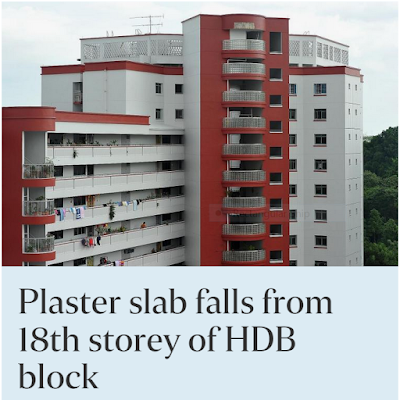 Engineering specialist Rezwan Hosni, 34, heard about the incident only yesterday. "I have children, and I frequently see children walking around here, so it's a bit worrying. They should do frequent checks," said Mr Rezwan, who has three sons aged seven, four and three.
Noting the red-and-white tape used for the cordon, he added: "They could at least put up a 'Danger' sign so people don't ignore the tape. I don't think most of the residents here know about it."
Despite living in a top-floor unit just below the affected facade, Mr Roland Teo, 37, had not heard of the incident before The Straits Times visited yesterday.
"I saw the cordon but I just thought they were doing painting or something like that," said Mr Teo, who works in sales.
Although the highest units in the block are on the 16th floor, the plaster fell from the facade above a balcony two storeys higher, which is not accessible to the public.
A taxi driver, who wanted to be known only as Mr Chai, 59, said police visited around noon on Sunday to ask if residents had witnessed the incident. Neither he nor his neighbours had heard or seen anything.
Residents said the pathway was popular and often used by residents of other blocks too. "It is lucky it happened (early in the morning). If it was in the middle of the day, someone could have been hurt," said a 64-year-old retiree who wanted to be known only as Madam Ho.
But she is not flustered by the incident: "We have lived here for 12 years and it's been okay, there haven't really been any problems."
The town council is checking the plastering works of Block 464 and its neighbouring blocks as an additional precaution. It will also be arranging for repair works on the facade of Block 464.
The Straits Times /S'pore                    Published on Tuesday, 21 July 2015     By Janice Heng                          Plaster slab falls from 18 storey of HDB block