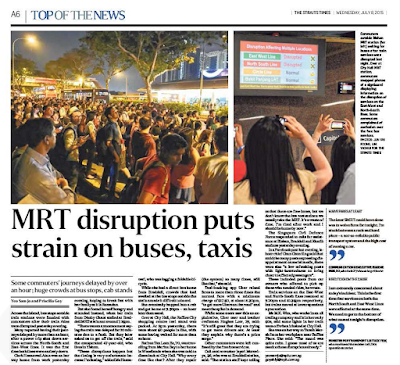 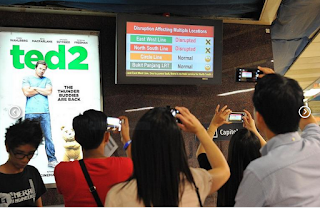 Over at City Hall MRT station, commuters snapped photos of a signboard displaying information on the disruption of services on the East-West and North-South lines (above). Some commuters complained of confusion over the free bus services.PHOTOS: JUN KAI FOONG, LIM YAOHUI FOR THE STRAITS TIMES
Across the island, bus stops outside train stations were flooded with commuters after their train rides were disrupted yesterday evening.
Many reported having their journeys delayed by more than an hour, after a power trip shut down services across the North-South and East-West lines. It was the first time both lines were entirely down.
Clerk Hasnawati Atan was on her way home from work yesterday evening, hoping to break fast with her family as it is Ramadan.
But she found herself hungry and stranded instead, when her train from Dhoby Ghaut stalled at Braddell MRT station at around 7.15pm.
"There was an announcement saying the train was delayed for 20 minutes due to a fault. But they later asked us to get off the train," said the exasperated 47-year-old, who lives in Yishun.

WAIVE FARES AT LEAST
The least SMRT could have done was to waive fares for tonight. I'm stuck between a rock and hard place - a not-so-reliable public transport system and the high cost of owning a car.
'COMMUNICATIONS EXECUTIVE EUGENE MOK, 30, who took 21/2 hours to get home
NEED TO KNOW THE CAUSE
I am extremely concerned about today's incident. This is the first time that services on both the North South and East West Lines were affected at the same time. We need to get to the bottom of what caused tonight's disruption.
MINISTER FOR TRANSPORT LUI TUCK YEW, who monitored the incident at LTA's operations centre

"These disruptions happen but the timing is very unfortunate because I'm fasting," added Ms Hasnawati, who was lugging a foldable bicycle.
While she had a direct bus home from Braddell, crowds that had swelled at the bus stops outside the station made it difficult to board.
She eventually hopped into a cab and got home at 9.30pm - an hour later than usual.
Over at City Hall, the Raffles City shopping centre taxi stand was packed. At 9pm yesterday, there were about 50 people in line, with some having waited for more than an hour.
Retiree Tan Lean Ee, 70, was travelling from Marina Bay to her home in Woodlands when she was told to disembark at City Hall. "Why every time like that? After they repair (the system) so many times, still like that," she said.
Taxi-booking app Uber raised fares to more than three times the normal fare with a minimum charge of $17.50, at about 8.30pm, "to get more Ubers on the road" and meet the spike in demand.
While some users saw this as exploitative, Uber user and leather craftsman Hughes Low, 29, said: "It's still great that they are trying to get more drivers out. At least they explain why there's a price surge."
Other commuters were left confused by the free bus services.
Call centre worker Jaysri Muruviya, 36, who was at Braddell station, said: "The station staff kept telling us that there are free buses, but we don't know the bus routes since we usually take the MRT. It's a waste of time. I'm tired after work and I should be home by now."
The Singapore Civil Defence Force responded to calls for assistance at Bishan, Braddell and Khatib stations yesterday evening.
In a Facebook post last evening, labour chief Chan Chun Sing said that amid the many posts expressing disappointment on social media, there were also "a few refreshing posts with light-heartedness to bring cheer to affected passengers".
These included posts from car owners who offered to pick up those who needed rides, he wrote.
Train services on the East-West and North-South lines resumed at 9.20pm and 10.35pm respectively, but trains moved at lower speeds as a precaution.
Ms M.K. Wan, who works in an oil trading company and is in her early 50s, said some lights in her train were off when it halted at City Hall.
She was on her way to Tanah Merah from her workplace near Raffles Place. She said: "The mood was quite calm. I guess most of us are used to these disruptions already."
The Straits Times/ Top of The News              Published on Wednesday, 8 July 2015                     By Yeo Sam Jo and Priscilla Goy            MRT disruption puts strain on buses, taxis